Coffman Engineers in Seattle started offering employees a profit sharing plan in 1981. In the mid-80s, it added a 401(k) feature to that plan. Among a total of 350 employees, 336 are eligible for the plan and 327 of those actually participate. The plan has assets of about $46 million.

According to Pat Piermattei, senior vice president at Coffman in Seattle, the plan offers participants six investment choices, including three white-labeled funds, a stable value fund, an intermediate bond fund and an S&P 500 fund. Piermattei tells PLANSPONSOR that having an adviser is key to offering white-labeled funds because the selection of money managers within the funds is so important. He adds that, in its history, the plan has not had any fund changes.

Coffman had an adviser to the 401(k) plan, but decided it needed a change. “We were looking for more depth—the firm we used was a one-man show—and we wanted more analysis of money managers,” Piermattei says.

In addition, Coffman annually benchmarked its adviser and there was one key area in which it felt it was lacking—participant education. “I actually go out on the road and visit most of our offices. Our chief financial officer and I cover all participant education. We wanted to expand that and have an outside adviser who would help.” Piermattei says.

When Coffman started searching for a new adviser, it found it difficult to find enough advisers in the Seattle area to get a good sample to approach, so it didn’t want to restrict the search to just that area. Piermattei says he saw an advertisement for InHub and called the company. InHub encourages plan sponsors to consider advisers across the country. In a client announcement, it says, “We’ve found that when committees limit their search locally, they effectively limit their talent pool. Typically as long as an adviser is willing to travel to the committee’s location(s), without a high cost attached, [it is] worth considering.”

NEXT: The RFP Process

The first thing InHub did was meet with executives at Coffman to get a good understanding of the plan and what Coffman wanted in an adviser. InHub built a request for proposals (RFP), and Piermattei says he was very happy with all the questions. The RFP was sent to eight firms InHub helped to select.

Piermattei says the process was all digital, which was helpful because Coffman has 401(k) trustees in Honolulu, Anchorage and Spokane, Washington, as well as Seattle. “All trustees were looking at the exact same RFP responses, which made comparison an easy process,” he notes.

Coffman shortlisted four advisers: two in Seattle, one in San Diego and Ellwood Associates in Chicago. Each came to Coffman’s Seattle office for a 2-1/2 hour interview.

Piermattei explains that InHub has different levels of service, and Coffman elected to go with one that did not use InHub’s assistance for evaluating RFP candidates. He notes, however, that InHub will assist with the evaluation if a plan sponsor desires. “Our trustees are experienced, but newer trustees might need more assistance,” he says.

InHub offers eRFP technology only, with which the RFP issuer would use InHub’s technology for the process, and InHub offers sample RFP questions, access to its adviser platform and technology assistance. It also offers a service assisting the RFP issuer up to the point the RFP is issued—the service Coffman used—and a full assistance offering, which includes RFP drafting, a short list of candidates that meet the plan sponsor’s criteria, custom score cards for the committee to evaluate proposals, an executive summary of responses with fee comparison chart, help with coordinating the finals presentations and assistance with creating the agenda and scoring methodology.  InHub says the full assistance RFP process usually takes less than three months.

InHub announced recently a service with which retirement plan consultants or advisers can license InHub’s RFP tool for one year to issue RFPs for any type of service provider on behalf of clients.

NEXT: An adviser is selected

Coffman made its final decision in August and hired Ellwood Associates in October 2015. One thing that sold the Coffman trustees on Ellwood was envisioning how one particular Ellwood employee would provide participant education. “We felt Ellen from Elwood would be well-received by educated engineers in our employee group; she would provide the best presentation to them,” Piermattei says.

In addition, knowing that investment manager review and selection was important to Coffman, InHub focused the RFP questions on the investment due diligence/selection process a bit more heavily than usual. Ellwood’s responses to these questions were important to Coffman’s selection of the firm. At the time Piermattei spoke with PLANSPONSOR, Coffman had not yet had its first quarterly meeting with its new adviser, but Piermattei anticipates a good meeting.

“I would highly recommend using an RFP to find a plan adviser and using an RFP service for the process. It allows plan sponsors to search nationally, and I feel if a plan sponsor wrote the RFP itself, it would not be anywhere near as encompassing and thoughtful as what InHub built for us,” Piermattei concludes. 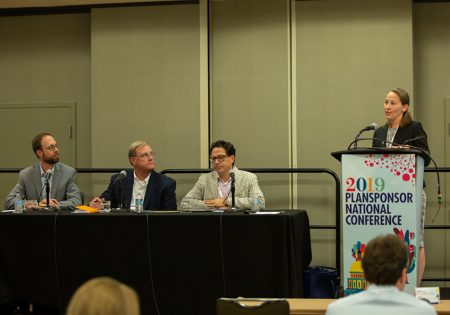