For many retirement plans, the focus on fees has been relatively recent. But the 457 plan committee for the City of Plano, Texas, has worked for over a decade to reduce recordkeeping expenses by a total of 90%.

During that same time period, the 457 plan of this suburban city, near Dallas, also has steadily increased its participation, from 35% in 2005 to 61% currently. “In my experience, I don’t have another [457] plan client that is even close to that type of participation,” says the plan’s adviser, Al DiCristofaro, a retirement plan consultant at AndCo Consulting.

The state does not allow public employers to do automatic enrollment or automatic escalation in its defined contribution (DC) plans, he says. “When you consider that the increase in participation was all done organically, and not through auto-enrollment, it’s even more impressive,” he adds. “Public retirement plans that are voluntary-only, and where there is also a defined benefit [DB] plan, usually struggle to get to 50% participation.”

Changes to the plan’s recordkeeping and investment menu have helped participation, DiCristofaro believes. “One of the most effective things that the City of Plano has done is to eliminate confusion in the 457 program,” he says. “It did that first by eliminating a multi-recordkeeper environment. And then it did that by streamlining the investment menu.”

By 2005, leadership in the Plano government realized “it had somewhat of a mess, in terms of its plans,” says the city’s director of human resources (HR), Shante Akafia.

“The city manager, Bruce Glasscock, and the city staff leadership said, ‘If we’re going to do this, we’re going to do it right—we know we don’t know everything, so we need some help,’” says Administrative Services Manager Andrea Cockrell. The city hired AndCo Consulting and started working with DiCristofaro to set up a stronger governance infrastructure.

“At that point, the city leadership said, ‘We’re going to have a retirement plan committee and develop bylaws, and have a formal investment policy and look at the plan’s investments quarterly,’” Cockrell says. “We talk to our peers in cities in the North Texas area, and we’ve come to realize this is not necessarily the case for many other organizations.”

Plano had three recordkeepers prior to a 2005 request for proposals (RFP) and consolidated to one. That reduced recordkeeping fees from 100 basis points (bps) to 46 basis points, Cockrell says.

In 2011, based on AndCo Consulting’s suggestion, the city renegotiated pricing terms with recordkeeper ICMA-RC, as a contract-extension decision neared. “The recordkeeper agreed to reduce fee levels from 46 basis points to 23 basis points, as an inducement for the city to exercise its automatic-renewal option,” Cockrell says.

Plan officials decided to do a full RFP in 2015, as the plan neared 10 years with its recordkeeper. “The committee agreed that it owed it to participants to fully explore the options present in the market, to determine the best value,” Akafia says. “If you have ever worked with a governmental entity, you are aware that the procurement process is an undertaking, and the city reached out to numerous recordkeepers to garner as much competition as possible.”

While the plan had no issues with its recordkeeper, the committee felt open to a change if the RFP process led it to conclude this was the best move for the plan, Akafia says. The city decided to keep ICMA-RC, but performing the RFP enabled it to negotiate another fee reduction in 2015, from 23 basis points to 10 basis points.

“I’m not the No. 1 fan of the procurement process, because it’s a lot of work. But doing the full RFP was the best way for us to renegotiate the fees,” Cockrell says. “It paid off for participants.”

As it negotiated lower recordkeeping fees, the committee also narrowed the 457 plan’s investment menu. The plan had over 150 investment options before consolidating vendors in 2005, an action that reduced the menu to 35. “Prior to the change, we had what our consultant would refer to as ‘The Cheesecake Factory’ menu for our investment lineup,” Akafia says. “We had numerous funds in various categories, which our employees found to be overwhelming and confusing, and which oftentimes caused indecision or failure to enroll.”

The committee discussed, philosophically, what “menu” it wanted and for comparison, as models, used the menus of two other restaurants with Dallas-area locations: Houston’s, which has a one-page menu, and In-N-Out Burger, which has only a handful of options. “The committee decided that employees would best respond to the Houston’s menu, so they would still have a number of choices, but not an overwhelming number like they had previously,” Akafia says.

Before the 2015 RFP, the committee had pared the menu down even more, to 30 options. In conjunction with that RFP, the menu got further culled to 24 options. As assets consolidated, the plan could then move to lower-cost share classes in many cases, Cockrell says.

The 457 plan now has an asset-based fee generated exclusively through shareholder-service fees—a type of revenue sharing—between fund managers and the recordkeeper. “Any excess fees between the revenue generated through the investment options and what is required for the recordkeeping fee is returned to the plan, to offset related expenses,” Cockrell explains. She says the committee has talked about moving to an explicit, flat administrative fee but worries it “might discourage members with small balances from joining and retirees with larger balances from retaining their funds in the plan.”

The committee now reviews investments and investment fees every quarter, Cockrell says. “For recordkeeping fees, it is typically something we talk about every year, or every other year. We look at: ‘Are we in line with our peers in the area?’” The 457 plan committee is advisory in nature, and the ultimate decisionmaker is City Manager Glasscock. “All of our initiatives ultimately funnel through Bruce,” Cockrell says.

Education targeted to the city’s diverse work force also has helped improve participation in the Plano plan. “You have the public safety groups—the police and fire—who typically earn more than the rank-and-file employees in the city. And just because of the nature of their job, they tend to retire at an earlier age,” DiCristofaro says. “So they pretty much get the picture on the need to save on their own, to supplement their retirement. Most of the struggle with Plano, and with similar plans, is in convincing the rest of the work force that saving voluntarily is a prudent move and that it will help them move toward a retirement that’s more economically feasible for them.”

Plano’s HR department periodically runs reports on the participation breakdown by department, and then the plan’s education subcommittee works with ICMA-RC to do targeted education for the departments. The written communication has helped, Cockrell says, but the most effective communication happens when the 11 plan committee members talk individually with employees in their departments about the plan.

“Our police and fire department members who have been on the committee do a really good job of mentoring new hires when they come into [their] departments. They tell them, ‘You should sign up for the plan,’ and when they’re getting their annual salary increase, they tell them, ‘You should put some of that money into the plan.’ Before those employees know it, they have sizeable balances in the plan,” Cockrell says. “And our other committee members are doing a lot of championing within libraries or parks and recreation. We have found that it’s the most effective way of getting people to sign up for the plan.”

“They look at committee members as ambassadors of the plan,” DiCristofaro says. “They’re not only providing effective oversight of the plan, but they’re taking the message back to employees in their department about why it’s a good idea to consider participating. 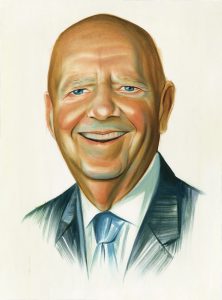