Since 2016, when Landscape Structures Inc. (LSI) added advisory firm intellicents inc. as 3(38) fiduciary investment manager for its 401(k)—at both the plan and participant levels—the sponsor has paid much more attention to plan-success benchmarks. Defining and tracking retirement readiness for this Delano, Minnesota, playground product manufacturer’s work force has helped both employees and employer.

Providing employees with an annual personalized retirement-readiness report gives them a clear picture of whether they are on track or need to take action, says Chief Financial Officer (CFO) Fred Caslavka. “It provides a starting point, when employees meet one-on-one with intellicents, for them to make good and informed choices about their financial future,” he says. “And having a retirement readiness report across our employee base has given the company an opportunity to address and set goals for potential improvement for LSI as a whole.”

Landscape Structures has both a 401(k) and an employee stock ownership plan (ESOP)—through which it is 100% employee-owned—to help employees save for retirement. “The 401(k) is the foundation of our retirement program and is necessary to be competitive in the marketplace,” says Karlye Emerson, vice president, corporate strategy and human capital at the company. “The ESOP enhances our continuous-improvement culture to one of investment and ownership, and provides employees with assurance that they can be self-supporting in their retirement years.”

The employer aims for employees to be able to maintain their standard of living in retirement, which LSI defines as having 75% to 100% of their pre-retirement income. According to its most current statistics, based on a 2016 retirement readiness report done by intellicents, 71% of employees were on track to achieve that savings goal.

Landscape Structures sees itself and its employees working in tandem to help ensure they save enough for retirement. “We encourage employees to at least put away 8% of their earnings in the 401(k), so they receive the full 4% employer match. And the ESOP has contributed, on average, 15% of their earnings each year,” Emerson says. “This sets up LSI to contribute more than twice the amount the employee does.

“However,” she continues, “the success of the ESOP is in the hands of all employees: Together, we grow the business and benefit from the rewards when the stock price increases. In the past five years, the ESOP has outperformed our 401(k) investments, even considering the strong bull market for equities we have experienced,” she says.

In its role as Landscape Structures’ plan-level 3(38) adviser, intellicents effectively has taken over fiduciary discretion on the composition of the investment menu, says Bradley Arends, CEO and senior consultant at the company, in Albert Lea, Minnesota. “We decide whether a fund manager gets hired or fired,” he says. “Landscape Structures has an oversight responsibility for us: Its job is to make the decision as to whether to hire or fire us. To get Landscape Structures out of the [investment] fiduciary environment, it can’t have any say on the funds in the plan.”

Hiring a plan-level 3(38) adviser made sense to Caslavka and his colleagues. “We realized we could get the same end result with our plan investments. So why take fiduciary responsibility for the investments when, for a small fee, we can get an advisory firm to do that?” he says. But, in their fiduciary role of evaluating intellicents, plan committee members always study the advisory firm’s investment analysis to ensure they are comfortable with its decisions, he says.

As part of its plan-level 3(38) work, intellicents also puts together the five risk-based custom funds—composed of the plan’s underlying core investments—that now serve as the 401(k) plan’s automatic enrollment default. “As the 3(38), we determine what the asset allocations of those custom funds are and the specific funds used in each,” Arends explains.

New hires who neglect to make investment selections get automatically enrolled into the default risk-based fund that intellicents classifies as best for their age range. Auto-enrolled participants will get moved into more conservative risk-based funds, over time. Employees already working at the company who want to invest in one of the risk-based funds can either choose for their allocation to be static—i.e., remain in a less conservative fund, past 40—or enroll in the default investment, in which case they automatically will get moved down the risk spectrum over time. More than half of participants who affirmatively elected the risk-based funds chose to go into the default.

LSI pays the full intellicents advisory fee, plus the full recordkeeping fee and other administrative fees. “I’ve been here 27 years, and we’ve always done it that way,” Caslavka says. “There has never even been a discussion about doing it another way. We would rather have the company take care of that and have participants gain as much in their accounts as they can, instead of having money pulled out of their account for those fees.”

Landscape Structures also hired intellicents to take on a wide-ranging 3(38) fiduciary adviser role at the participant level. Previously, it had tried hiring an advisory firm to give employees advice. “It wasn’t for a flat fee, though,” Caslavka says. “The firm was getting paid based on the investments our employees picked, and it also was trying to sell participants other products. We weren’t comfortable with it.”

Intellicents offers individual participant meetings on-site several times a year, and participants also can call the firm or go to its office. Its participant-level work for Landscape Structures includes both traditional retirement plan-type advice and traditional wealth management-type advice. A new hire with no 401(k) plan experience may want advice on how much he should save in the plan, for example. A longer-tenured employee may want advice on picking a 529 plan to save for his child’s college education. “Our fee is a flat fee, so we have taken out any inkling of a conflict of interest,” Arends says.

“One of our committee’s objectives is to reach the 90-10-90 goal in about five years,” says Caslavka, who looks to plan design and intellicents’ personalized participant education to help achieve that. He says, “We have to create an environment that fosters participant engagement. 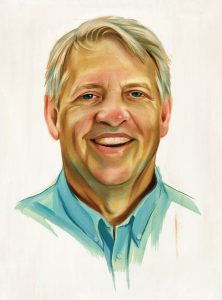