With headquarters in Wilmington, North Carolina, PolyQuest, Inc., is a PET resins manufacturer and distributor, employing just under 100 workers. Important to the company is offering great benefits to its employees—and it has recently become very proactive in doing so.

“We want to educate employees about the importance of planning for life after work and give them the best possible tools to feel knowledgeable and in control of their finances,” says Kimberly Mueller, human resources (HR) manager at the company. “That way, they won’t be struggling to make ends meet or relying only on Social Security once they retire.”

It only made sense, therefore, that several years ago, when the PolyQuest employees expressed disappointment in the lack of resources available to them in their 401(k) plan, the company listened. The HR department “was not as in-the-know as we should have been about our plan, and we were not receiving attentive service or educational assistance from our provider,” Mueller recalls. Combine those deficiencies with having an unwieldy number of unbundled plan providers and a separate third-party administrator (TPA), and a change was overdue.

“Considering that we were running a part of the plan, that felt like a fail on our end,” Mueller says.

The plan sponsor was also learning of the upcoming changes to the Department of Labor (DOL) fiduciary rule, and of features that many other plans offered. For all of these reasons, in 2016, the sponsor decided to make a switch, while keeping participation rate and a cost-effective, targeted focus on education in mind.

A Focus on Education

As its adviser, Katherine Medina of Merrill Lynch, also in Wilmington, helped the company shop around for a new plan recordkeeper, one that could support, teach and benefit participants. By mid-2016, the plan sponsor had formed an investment committee, composed of Mueller, the chief financial officer (CFO) and the controller, who together worked with Medina to design a plan for PolyQuest’s unique employee demographics and educational needs. Today, the plan is bundled, with MassMutual as recordkeeper.

When the plan went live, at the start of 2017, the change did not go unnoticed. Since the company’s first education meeting, given by its new provider, participation has grown to 85%, with 18 individuals enrolling or increasing their contributions in that first meeting. This past January, 10 more employees enrolled or upped their contributions.

Mueller says much of the plan’s success is due to the one-on-one contact offered by the team at MassMutual and Merrill Lynch, which provides PolyQuest’s workers with effective, easily comprehensible materials. “They’re really good at putting everything in relatable terms for our employees,” she says. “Just getting them to see that something as simple as not buying a pizza every week—the savings differential of investing that money in your 401(k) and the compounding of that amount over 30 years is dramatic.”

The former plan design had no built-in effort to engage participants, but the new design includes reaching out twice a year. PolyQuest hosts informational sessions in both its Wilmington and its Darlington, South Carolina, locations. And, as most employees are shift workers, MassMutual and Merrill Lynch conduct each session several times to be sure all can attend.

Employee response has been strong—aided, too, by the fact that the company counts attendance as paid work time. Of course, those who had complained about the scarcity of education attend, but even workers who were non-savers now contact Mueller or Medina to request a personalized meeting.

“We’ve even had people attend meetings who were stubborn and didn’t think it was something for them—once they saw the plan broken out, they realized they really had to do this,” Mueller says.

To keep meeting content relevant and interesting, the company periodically surveys participants, asking what educational topics would benefit them most, and notes which sessions produce the best results. This drives attendance and ultimately improves employee savings rates, Mueller says.

Currently, employees must work at the company for one year to be eligible to enroll. After their first anniversary, they then must wait until one of the semiannual enrollment dates—in January and July—to join and become vested.

The company matches 100% on the first 3% of employee contributions, and 50% on the next 2%. “So, if you can make even a minimal contribution to get it matched, that’s you helping you and the company collaborating with you, trying to give you a better path,” Mueller says.

Because PolyQuest was concerned about how some participants would react to the plan changes, the company decided not to add automatic enrollment or automatic escalation at the time. But once the plan was executed and the response was positive, it decided auto-features might do well after all. In the upcoming years, Mueller hopes to employ a small auto-escalation—1% to 2% to start—and then monitor the response.

“The fear was they wouldn’t be open to it and they would un-enroll,” Mueller says. “But it’s looking like a better option going forward. It gives them a starting point, and they can build from there.”

Meanwhile, the sponsor provides other tools to aid plan participants in the building: MassMutual offers step-by-step goal-planning functions to help them better assess the level of risk with the plan’s investments choices.

To keep current about such offerings and industry trends, a goal for the plan itself is benchmarking, Mueller says. Unlike when she was unaware of the diverse plan features and services available, she anticipates benchmarking PolyQuest’s plan against other industry offerings and plans in her region.

“Now that we have a better handle on everything, we want to make sure we’re in the know about what the trends are, what other companies are offering that’s successful, so we can stay on top of things and stay competitive,” she says.

Despite the striking changes—and results—what impressed Medina the most was Mueller. Her attention to the plan’s details, to compliance and to her company’s employees stands out from other clients the adviser has worked with.

“I was surprised at how much involvement she had versus other plan sponsors,” Medina says. “She was the one who knew what was going on in the first place, was able to get information on what was working well with the plan, what she wanted to see change. It’s what helped us with the plan design and ultimately helped us pick MassMutual as the provider.”

Today, Mueller continues to make participant engagement the top priority. Ensuring that educational resources are understandable and paying close attention to which workers require better education, then providing it, are just some of the duties she fulfills, Medina says.

“She spends a lot of time on-site, at all locations, and [employees] feel very comfortable going to her first with any questions,” Medina adds. To further aid the workers, Mueller is helping her firm look into launching annual report cards—personalized snapshots demonstrating each participant’s retirement readiness. Rather than grading the person’s financial retirement goals, the tool would show him how close he is to his goal and the improvement a slight modification could make. The card would give a unique, tailored assessment of the participant’s saving progress without the stress, or time commitment, of a one-on-one meeting.

“It’s another way of making it pretty clear what their current situation is and how they can have an impact on changing that,” she says.

Thinking back, Mueller sees how far the plan has come since “we felt like we didn’t know enough about it” and took action. Employees’ impression of the plan has almost completely reversed, she says.” 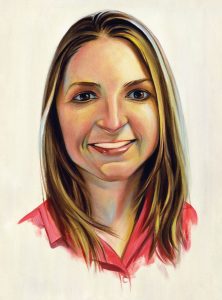