In Baton Rouge, Louisiana, a father and his 18-year-old son began arguing about the lack of orange juice at their home. Reuters reports that the argument escalated to where the son damaged the home and broke a porcelain vase. The father grabbed a handgun and chased his son out the front door. He fired several shots, striking the teenager once in his but.tocks. The son was taken to a hospital with injuries that did not appear to be life-threatening. The father has been charged with attempted mans.laughter and ill.egal use of a weap.on.

In Fort Worth, Texas, Elizabeth Sullivan recently celebrated her 104th birthday, and received a gift basket from Larry Young, the CEO of the Dr. Pepper/Snapple Group. WSB-TV in Atlanta reports that Sullivan became a Dr. Pepper aficionado while in her 60s and drinks three of the soft drinks per day. “Every doctor that sees me says they’ll kill you, but they die and I don’t. So there must be a mistake somewhere,” Sullivan said.

In Akron, Ohio, a 50-year-old man was impersonating a police officer when he shined a spotlight into a motorist’s car and swerved in front of it to pull the motorist over. However, the motorist was actually a detective, so the man was arrested for impersonating an officer. Contents of the man’s vehicle included a g.un and law enforcement parap.hernalia. The man was also charged with mishandling a fire.arm and obstructing official business.

In West Sunbury, Pennsylvania, a man decided to steal some gasoline from a “friend’s” garage for another friend’s car. However, as he jimmied open the door to the garage, the homeowner heard the noise and came to investigate. The Associated Press reports that the man ran, but left behind his personal credit card he was using to open the door, making it easy for police to find and arrest him.

In Tallahassee, Florida, a 46-year-old man took a taxi to a bank, and when he got out of the cab, he told the driver he would take care of him when he got out of the bank. Once inside the bank, the man approached the branch manager and demanded $100,000, telling the manager he had a g.un and exp.losives. Tellers at the bank alerted police, who were told by the cab driver that the man was dr.unk and had not paid his $25.50 fare. According to the Tallahassee Democrat, police reported that the man was sitting in the manager’s office appearing “very into.xicated and spaced out.” The man did not cooperate with officers and was tased before being arrested for robbery. The cab driver said he wanted to press charged for the unpaid fare, so they added a charge of petty theft.

Not the optimal way to do it, but he finally got the cat out of the tree.

Snoop Dogg and others are encouraging folks to push their 401(k)s to divest from g.un investments.

If you can't view the below video, try https://youtu.be/Y5K-Ti6tQzA?list=RDY5K-Ti6tQzA

In Putumayo, Colombia, an image of Jesus is believed by some to have appeared following a landslide. 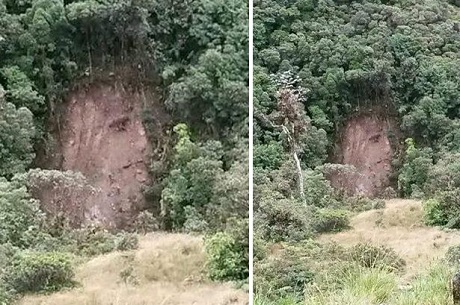