In Kent, Ohio, a woman went into a clothing store fitting room and started stuffing clothes in her purse. She heard store closing announcements, but wanted to finish her deed. When she came out, she realized she was locked in the store, so she called 911. According to the Associated Press, police found the stolen items in her purse and arrested her.

In Leesburg, Florida, when a nurse heard a couple had named their newborn baby Juliette, she told the parents a baby named Romeo was born that same day. Due to privacy laws, she couldn’t tell them where Romeo’s mother’s room was, but Juliette’s parents found them. According to the Orlando Sentinel, hospital staff dressed Romeo in a tuxedo and Juliette in a dress for pictures.

The most chill cat ever.

If you can't view the below video, try https://youtu.be/l0hOcv0JQjw

In Murfreesboro, Tennessee, a woman found the longest Cheeto ever. [pic] 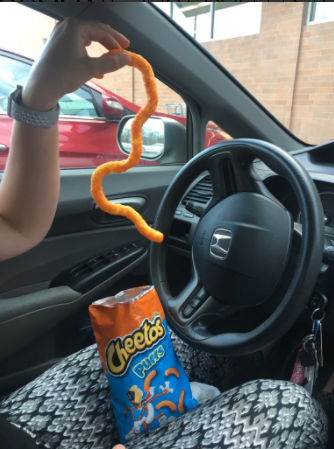