In Wayne, West Virginia, a woman left her dogs in her car while she shopped at a Walmart. She kept the car running to keep the pups cool. However, WSAZ reports, the dogs shifted the car out of park and took a little joyride. Shoppers watched as the slow-moving vehicle collided with the building.

In Changsha, China, a man who couldn’t wait to meet his online girlfriend took a trip from Holland to meet her. When he arrived at the Changsha Huanghua International Airport, the girlfriend wasn’t there, so he waited. Ten days later, he was taken to a hospital for exhaustion. According to the Shanghaiist, when the girlfriend contacted Hunan TV after hearing about what had happened. She explained that her boyfriend had sent her a photo of his flight information before his departure, but she had not understood the meaning of the picture. Also, she said, they had previously decided they were going to wait a year until meeting.

In Berlin, Germany, a 90-year-old woman visiting an art museum came across art work depicting part of a crossword titled “Reading-work-piece.” She then proceeded to fill in the missing words with a ballpoint pen. Officials at Nuremberg’s Neues Museum filed a criminal complaint, but according to the Associated Press, her lawyer told a court that the woman argued she hadn’t damaged the piece “but only completed it as the artist intended.” There was a phrase at the edge of the picture that said “Insert Words.” She told police that the picture even gained in value.

In Elmwood Place, Ohio, a woman was pulled over by police noticing her vehicle registration had expired. She told officers she did not have to renew her registration because she was “traveling,” not driving, according to Cincinnati.com. The officer told the woman that her vehicle would be towed because of the expired registration. She told the officer the United States Constitution allowed her the right to travel without police interference. The woman then led police on a high-speed, one-mile chase that ended on her own driveway. She fought off the officer’s attempt to arrest her and asked bystanders for help.

In Phoenix, Arizona, a state trooper noticed a driver following closely behind him as he was doing 80 miles per hour on a highway. Alarmed at the possible motives of the driver, the trooper slowed down and then sped up to 90 miles per hour while activating his emergency lights in an attempt to assess the driver’s behavior and get the driver to stop following him, KTVK reports. Eventually, the trooper was able to maneuver behind the vehicle and pulled the driver over. When confronted by the trooper, the driver said he was pursuing and videotaping the trooper to document the trooper’s driving above the speed limit while seemingly not responding to anything. The driver was arrested for criminal speeding. Officials told KTVK if someone suspects a trooper is driving negligently, they should report it rather than taking the law into their own hands.

In Colorado Springs, Colorado, a bad hail storm recently made it look a lot like winter. 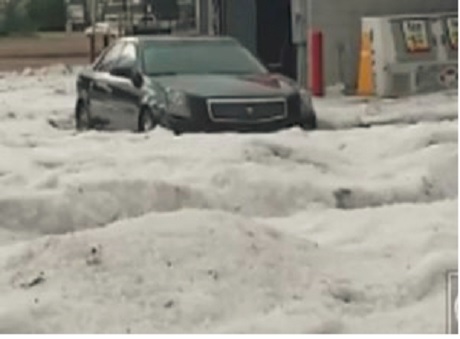 In Halifax, Virginia, cops are pulling over drivers for a different kind of DWI.

If you can't view the below video, try https://youtu.be/QOZzkkVaqxQ