In Richmond, Virginia, a woman’s obituary posted in the Richmond Times-Dispatch starts, “Faced with the prospect of voting for either Donald Trump or Hillary Clinton, Mary Anne Noland of Richmond chose, instead, to pass into the eternal love of God.”

In Altoona, Pennsylvania, four volunteer firefighters have been suspended and police have charged them with making the false alarms. According to the Associated Press, the men are responsible for five false alarms. Their reason for making them: they enjoyed the thrill of riding in fire trucks.

In Denver, North Carolina, people should beware of the Lowe’s home improvement store’s garden center. According to the Associated Press, a spokeswoman for Lowe’s Companies Inc. said in an email that a customer was bitten in the outdoor lawn and garden center by a copperhead snake. Employees called 911 and searched for other snakes. No others were found, but a pest control company was called to check.

In Salem, Massachusetts, a man asked a female neighbor to help him retrieve the key he dropped down a trash chute in their apartment building. According to the local ABC News station, Cpt. Conrad Prosniewski of the Salem Police Department said the man first attempted to hold the woman by her ankles and lower her head-first into the chute. When that didn’t work, he tied a sheet around her and lowered her in. However, the sheet ripped and she fell into a dumpster, where the trash compactor came on and crushed her leg. Pronsiewski recommends calling building management rather than trying to obtain lost items down a trash chute by yourself.

In Palm Bay, Florida, police responded to a call about a potential burglary. A concerned worker called 911 after finding several ceiling tiles on the floor and papers strewn about the All Florida Properties office. Police told Florida Today that officers arrived and began going room to room to find out why the office was in such disarray. The found the culprit—a raccoon hiding behind a potted plant. They captured it with a catch pole and led it into a wooded area behind the building.

Workers at the Mount Washington Observatory took time to “play” in the 100-plus miles-per-hour wind.

If you can't view the below video, try https://youtu.be/ezIqFyjAUP4

Do you notice anything unusual about this brick wall? 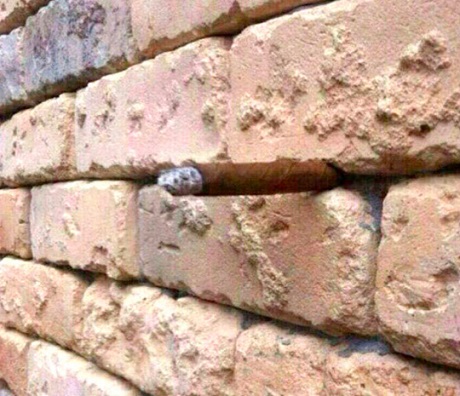 Hint: look for the cigar sticking out of it.