In Framingham, Massachusetts, politely holding a door open for a police officer has landed a man in jail, the Associated Press reports. Authorities say the man was at the Natick Mall when he held the door for the leaving officer. That officer thought the man looked familiar, and went to check his cruiser’s computer. The officer found there were three warrants out for his arrest—for her.oin possession, shoplifting and driving with a suspended license. The officer returned to the mall and arrested the man.

In South Brunswick, New Jersey, a man seeking revenge against the man dating his ex-girlfriend went to a house and caused $10,000 in damage to vehicles in the driveway. According to the Associated Press, the man believed the vehicles in the driveway belonged to the other man. However, he was at the wrong home. Police say the man was caught on surveillance footage walking around the property with a knife and damaging the vehicles. They went to his home and arrested him hours later.

In Portland, Oregon, a flight from Sacramento, California, bound for Seattle had to divert and land. A man threatened to become violent if flight attendants didn’t serve him a be.er during the flight. According to the Associated Press, the man locked himself in the bathroom and screamed and pounded on the door. He also demanded hugs from flight attendants. He has been charged with interfering with a flight crew.

Fortunately for this seagull, it does not satisfy the tuna’s taste.

If you can't view the below video, try https://youtu.be/VTd9WGyl2pI

Before cutting down a tree in your yard, you may want to move your boat… and truck.

If you can't view the below video, try https://youtu.be/cUVqjPwEZFg

In Tauranga, New Zealand, a driver rear-ended a vehicle that was slowing for stop-go traffic control working in the area. Perhaps it was because of what the driver was using to steer the car. 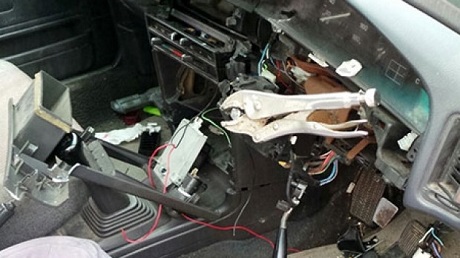