In Hanover, Germany, a Norwegian man was driving back to Oslo When he decided to stop at a bank to get money. When he was unable to withdraw money from that bank, he walked to another to withdraw funds. Germany’s The Local reported that he was unable to retrace his steps to find his car, and he had lost the piece of paper on which he wrote down the name of the street where he parked. His search for his car lasted three weeks, in which a local resident helped him look and let him stay at her residence. Finally, a reader of the Hannoverische Allgemeine Zeituing told the newspaper she noticed an abandoned car parked in front of her house.

In Beijing, China, a woman was stopped by security at the airport and told she could not bring a bottle of imported cognac on the plane in her carry-on. It was too late to transfer the cognac to her checked-in luggage, so she sat down in a corner and drank the entire bottle by herself. According to The Nanfang newspaper website, the woman started acting wildly and yelling incoherently. She fell to the floor and was unable to get up. When police arrived at the scene, they decided not to let her board her flight out of concern that she had become a security risk to others and herself. The woman was taken to a convalescence room and was checked out by a doctor. She was eventually released by police to her family who had come to Beijing Airport to escort her home.

In New York, New York, as a JetBlue flight arriving from Jamaica was taxiing toward a gate at JFK Airport, a 61-year-old passenger seated at a window attempted to climb over her seat mate, and the two women got into an altercation. The 61-year-old pulled out an eyebrow razor and slashed at her 52-year-old seat mate, and the younger woman pulled out pepper spray, according to CBS News. Seven people were treated for difficulty breathing, and the two women were arrested at the airport.

In Madisonville, Kentucky, a woman broke into a home with the intention of stealing prescription medication and cigarette filters. But, while there, she noticed the stove had been left on by the owners and she worried it was a fire hazard, according to the local NBC News station. So, she called 911. She is now in jail.

From estately.com, the most embarrassing Google searches for each state, http://blog.estately.com/2015/08/mapping-each-states-most-embarassing-google-searches/.

If you can't view the below video, try https://youtu.be/HRtAMEWDLfY

In Wildwood, Missouri, a woman shared with a TV station that she saw the face of Donald Trump in a tub of butter. (Shaking my head.) 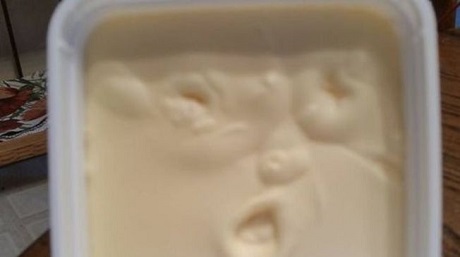