In Flagler County, Florida, the jail has put up a neon, blinking “vacancy” light. According to the Associated Press, Flagler County Sheriff Rick Staly has dubbed the county jail the Green Roof Inn. A sign lists the amenities at the facility—there is no privacy, group bathrooms and no meal selection. But inmates do get free transportation to court and state prisons, designer handcuffs and leg irons, color coordinated jumpsuits and shoes. Staly says it’s a warning that jail is not a “5-star hotel.”

In Soroe, Denmark, a volunteer in a secondhand charity shop said a woman left a bag of clothes, which included a coat, in the shop’s container. He told the newspaper Dagbladet Ringsted og Sjaellandske that he was checking the coat’s buttons, zippers and pockets when he noticed a bulge in one pocket and found $8,284 worth of money in euro bills. He called the police so they could investigate who owned the coat before donating it.

In Transylvania, Romania, a university has published the results of a study about how safe it is to eat snow.  The 2017 experiment showed it was safe to eat snow that was a half-day old, and safer to eat it in the colder months. But by two days old, the snow is not safe to eat, Istvan Mathe, a professor at the Sapientia Hungarian University of Transylvania, told The Associated Press. “I am not recommending anyone eats snow. Just saying you won’t get ill if you eat a bit,” he said.

In Dongguan, China, a security guard at an airport told a woman she would have to put her purse through the screening machine. Security video shows her leaving the screen and then emerging from the device. Still x-ray images online show a person in high heels kneeling among bags and other items. Many Chinese migrant workers carry their annual earnings home to family in cash during the Lunar New Year holiday, the busiest travel period of the year. “Passengers are warned that not only is this kind of behavior forbidden, but also the radiation from the machine is incredibly harmful to human health,” the People’s Daily said.

In Oregon, a woman felt a prick under her eyelid and thought it was a stray eyelash, but after a week she decided to see what was causing the irritation, put her finger under the lid and pulled out a worm. She pulled out about six more tiny worms over the next few days. That is when she sought medical help. She consulted with the Centers for Disease Control and Prevention, which identified the worms as Thelazia gulosa, a parasite typically found on cow eyeballs. Richard Bradbury, team lead of the Parasitology Reference Diagnostic Laboratory at the CDC’s Division of Parasitic Diseases and Malaria, told CBS News that 14 worms were removed from the woman’s eye over a 20-day period. Doctors believe Beckley was infected when a fly landed on her eye while she was traveling through cattle fields in southern Oregon, according to USA Today.
Dollar Store hacks.

If you can't view the below video, try https://youtu.be/eiY7LteJhz8.

Ok, so she’s new to bowling.

If you can't view the below video, try https://youtu.be/qCT9EfXxXYg. 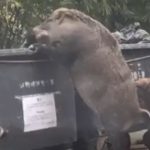