In Ketchikan, Alaska, new yellow-painted highway lines are crooked and the paint that’s been used by state transportation officials has stained cars, officials said. Among those affected was Ketchikan Gateway Borough Mayor David Landis, whose car ended up with yellow paint on it. “You come to expect having highway striping like that to be straight and have orderly looking lines and be professionally applied,” Landis said, according to The Ketchikan Daily News. “Something was clearly wrong with the equipment or the operation of that equipment to have so many things wrong all at once.” A Department of Transportation spokeswoman said the paint is “not drying as quickly as it should due to humidity in southeast Alaska.”

In Beddington, Maine, a forest fire was averted by a woman with a frying pan. Forest rangers say the woman used a frying pan to carry water back and forth between the flames and a nearby pond in a wooded area, WGME-TV reports.

In Preston, England, a man was referred to doctors for a nagging cough that had lasted more than a year. The doctors did a scan of his lungs and found an object they assumed was a tumor. However, during a bronchoscopy, they discovered the tumor was actually a tiny toy Playmobil traffic cone the patient had received as part of a gift when he was seven. According to The Guardian, the doctors said while kids commonly inhale small objects by accident, this case was unusual because the onset of symptoms occurred nearly 40 years later. To their knowledge, they said it was the first reported case of a tracheobronchial foreign body that was overlooked for 40 years. They hypothesize the patient’s airway somehow adapted to the presence of the plastic toy or was absorbed into the lining of the lung.

In Sterling, Connecticut, police saw a man strike a curb with his vehicle and break other laws. They pulled him over and he failed a sobriety test, and police found drugs in the car. Of course he was arrested, but the shirt he was wearing at the time of his mugshot was unfortunate. The Smoking Gun shows it was a green T-shirt that said, “Beer + Beer = Shenanigans.”

In Tampico, Mexico, it rained fish this week. Tamaulipas civil defense says in a brief statement that rain Tuesday in the coastal city of Tampico included fish. Photos posted on the agency’s Facebook page show four small fish in a bag and another on a sidewalk. According to the Associated Press, the U.S. Library of Congress says it’s a phenomenon that has been reported since ancient times. Scientists believe that tornadoes over water—known as waterspouts—could be responsible for sucking fish into the air where they are blown around until being released to the ground.
The picture on this man’s shirt in his mugshot suggests he was experiencing déjà vu. 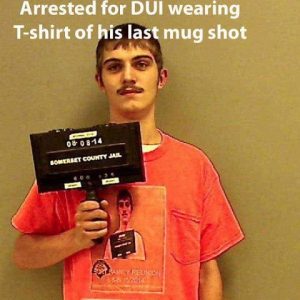 In Perth, Australia, a 23-year-old man was arrested by transit guards after he was filmed clinging to the back windscreen of a train which was moving 110kmph.

If you can't view the video below, try https://youtu.be/oK4XJYSWIr8.

In Colorado Springs, Colorado, a raccoon participated in a police ride-along.

If you can't view the video below, try https://youtu.be/az24AjW_-cI.