In the Arnhem, Holland, a 69-year-old man has filed a lawsuit against the government requesting that his date of birth be switched from March 11, 1949, to March 11, 1969. He told the court that having an official age that did not reflect his emotional state was a challenge for his career and love life, according to The Guardian. He said that in exchange for being legally younger, he would agree to renounce his pension. A ruling is expected within four weeks.

In Malmo, Sweden, the Disgusting Food Museum aims to challenge perceptions of taste and help visitors contemplate why one culture’s abomination is another’s delicacy. Grasshoppers, cooked animals’ skulls and other body parts, including an eyeball, are on display in pots or on boards. European fare ranges from Iceland’s cured shark, Hakarl, to Sardinia’s Casu Marzu cheese, which is riddled with insect larvae. There is Scottish haggis, made from sheep innards, and Sweden’s smelly Surstromming fermented herring. According to Reuters, North America is represented by sweet treats: Jell-O salad and root beer. Australian visitor Nichole Courtney said she was surprised to come across Vegemite, her homeland’s sandwich spread of concentrated yeast extract which is known to divide opinion. “Things like Vegemite which we find really normal at home, like we’d eat that every day for breakfast, are next to things like the shark that I couldn’t imagine tasting and I think it is revolting so it’s quite funny for us,” she said, according to the news report. If visitors find displays too revolting, not to worry, the entry tickets are not really tickets—they’re printed on vomit bags.

In Milton, West Virginia, police have received reports of rabid raccoons terrorizing a neighborhood. However, police found they were not rabid but “drunk” on crabapples. According to the Huffington Post, police recently hauled in two drunk raccoons; they said catching them was a “community effort.” After the animals sobered up, the officers released them into the woods unharmed.

In Gulfport, Mississippi, a man has been arrested after he drove his pickup truck into a courthouse. News outlets reported that the police department said in a news release that the 28-year-old told officers he intentionally crashed into the Harrison County Courthouse early Saturday because it was the best way to let them know his drug parap.hernalia had been stolen. No one was hurt.

In Manchester City, England, a referee has been banned for three-weeks by the English Football Association for the way he asked team captains to decide the kick-off before a Women’s Super League (WSL) match. A coin toss to decide who kicks off is a requirement under the laws of the game but the referee left his coin in the dressing room and allowed the captains to play rock, paper, scissors instead, Reuters reports.
In Pasco County, Florida, a sheriff’s deputy pulled over an unusual driver in an unusual car, for speeding. The driver was dressed as Fred Flintstone, and he was in a Smart car customized to look like the foot-powered caveman car seen in the 1960s cartoon series, according to local station WPTV. 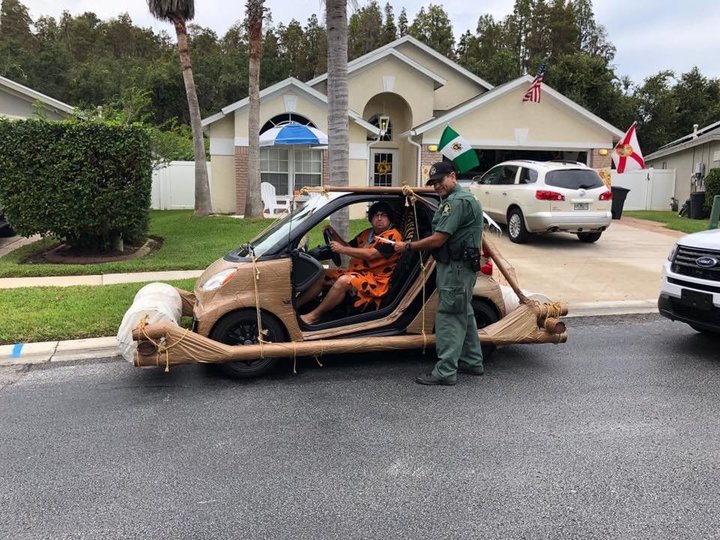 Oh, the things children say and do!

If you can't view the below video, try https://youtu.be/tbtx0xdy6kQ.