The Tooth Fairy’s purse strings appear to be tighter than a year ago with the average monetary payout down by 43 cents, according to the Original Tooth Fairy Poll sponsored by Delta Dental.

The Tooth Fairy’s average cash gift declined to $3.70 for a lost tooth, down from $4.13 one year ago. Delta Dental says the Original Tooth Fairy Poll has typically served as a good indicator of the economy’s overall direction, tracking with the movement of Standard & Poor’s 500 Index (S&P 500) for 14 of the past 17 years. 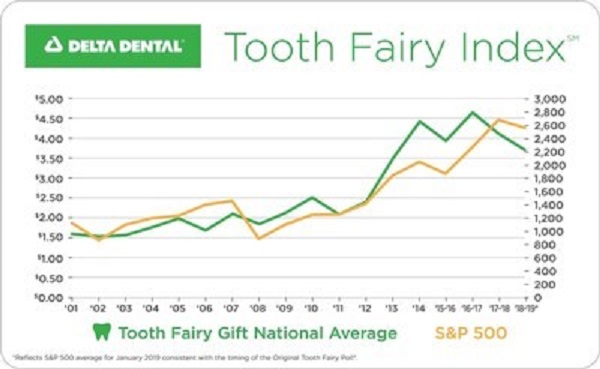 However, not all parents polled say the Tooth Fairy is following the national average. In homes that the Tooth Fairy visits, 37% give their child at least $5.00 or more. Also, a first lost tooth stands out as a more celebrated occasion, with an average of $4.96, representing $1.26 above the $3.70 average for subsequent teeth lost.

At $4.19, the West continues to lead U.S. regions in highest average monetary gifts for a lost tooth, but dropped 66 cents compared to a year ago ($4.85). This year, the South, at $3.91, replaces the Northeast for second-highest regional average, but slid by 21 cents when looking back a year ($4.12).

Nearly half (48%) of parents report that their children choose to save their Tooth Fairy Earnings.