In Crawley, West Sussex, England, a 57-year-old woman who has suffered agoraphobia for years has been working on overcoming the debilitating disease. She left her home for the third time in 10 years with a friend as part of her reha.bilitation. That’s when she saw a wooden pallet preventing her friend from reversing her car out of park, tried to move it and fell into a hole, according to The Daily Mail. She now has two black eyes and a suspected fractured leg. Sadly, she feels the experience set her back ‘years’ in her battle with the phobia.

In Franklin County, Kentucky, a man that escaped from a North Carolina prison more than 40 years ago, turned himself in. According to WBTV, the man, convicted of stealing, escaped from prison in 1971. According to the Franklin County Sheriff’s Office, the man has “a lot of medical problems” and can’t walk. He told deputies he hasn’t been able to get treatment because he doesn’t have a Social Security card or any viable identification, and he turned himself in to get medical help.

In Colorado Springs, Colorado, a man has been fined for discharging a fir.earm within city limits. According to the L.A. Times, he told police his computer was acting up, giving him the “blue screen of death,” so he took it in an alley and shot it eight times.

In Slidell, Louisiana, firefighters responded to an unusual call. When they entered the home, they found a large duck stuck inside a chimney with its head showing out of the bottom. Firefighters had to dismantle part of the fireplace to reach the duck, the Associated Press reported. It took more than two hours to safely remove the bird. According to the news report, it’s unclear how the duck became lodged in the chimney.

In West Pittston, Pennsylvania, residents recently experienced an unusual “rain” storm. Torn wads of toilet paper and shredded pieces of plastic bags covered roofs, lawns and trees, according to UPI. One family called the Environmental Protection Agency, which directed them to the Federal Aviation Administration. According to news reports, the FAA confirmed that an investigation into the matter is underway.

In Boise, Idaho, firefighters responded to a house fire. When they approached the home, they heard cries of ‘Fire! Fire!’ and ‘Help! Fire!’ They rushed in to rescue who they thought were the residents of the house, but instead found parrots. According to UPI, crews reported there was no one in the house, only the birds. The birds were removed and given oxygen.

Somewhere in China, a man was stopped for exceeding the weight limit on his vehicle. He was carrying an entire minivan on the back of his bike. 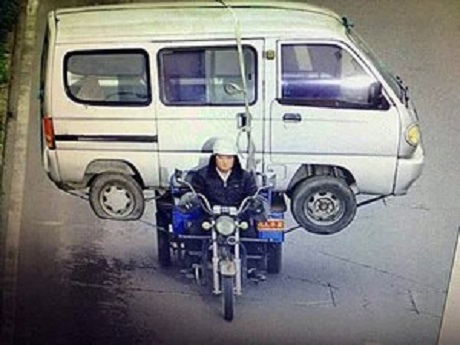 Creative ways to dunk your Oreo in milk.

If you can't view the below video, try https://youtu.be/h1kwZrtkgUc