In Port Wilunga, Australia, a man sustained a gaping wound to his hand while using a chainsaw at his residence. He phoned two emergency departments, but was told that they were very busy and would not be able to treat him for more than 10 hours. According to the BBC, the man then used a large sewing needle and some fishing line to sew up the wound and washed it with gin to prevent infection. He also drank gin to help with the pain. The man later decided to drive to the hospital for treatment after not being able to contact his wife. He was pulled over by police after failing to stop at a sign, and charged with several driving offenses as well as being issued an immediate license disqualification. He recently lost an appeal to his dru.nk driving charge.

In Irving, Texas, a passerby reported what was believed to be a half-na.ked woman’s body in a box near the entrance to the landfill. Police found the woman alive, but very dru.nk. According to the local CBS news station, a friend had reported her missing after he left her at the curb of a nightclub to get his car and came back and she was gone. Initial exams showed no signs of as.sault, and the woman says she doesn’t remember how she got to the landfill. Lesson learned?

In Deerfield Beach, Florida, a woman went with her friend and three-year-old daughter to a liq.uor store. The friend got into an argument with another customer, pulled out a gun and chased the other customer outside. When he came back in, he fumbled with the gun and shot himself in the leg. He then handed the gun to the woman, and the two ran out of the store to hide the gun. However, they left the three-year-old there. The woman has been charged with child neglect and tampering with evidence.

In Hull, England, a man and woman went to the city council office to get married. During a pre-wedding meeting with a registrar, the man excused himself to make a phone call—to find out what his intended-bride’s name was. According to Sky News, the registrar notified authorizes and the couple was arrested for conspiracy to facilitate a breach of immigration law.

In Iiyama, Japan, the Iiyama Snow Festival Planning Committee held a “1,500 Snowmen Challenge,” designed to commemorate the planned opening of a train station. More than 500 people constructed 1,585 snowmen within an hour, breaking a Guinness World Record. The previous record of 1,279 snowmen was set in Utah in 2011. According to UPI, officials said each snowman had to be at least 36 inches tall and be composed of three snowballs with eyes, a nose and arms.

In Boston, Massachusetts, commuters experienced a traffic jam… caused by a boat. The boat was being transported early to the convention center for a boat show, ironically, to avoid weather-related complications as Boston is due another snowstorm, when it got stuck in a snowbank. UPI says downtown Boston Business Improvement District ambassadors grabbed shovels and cleared the snow from around the boat with help from a construction crew.

In Boston, Massachusetts, a man spent a significant amount of time shoveling snow out of a parking space, and placed an old bookshelf in it when he left February 8 to work an evening shift. When he came home around midnight, he found a car parked in the spot. So, the man decided to “put the snow back.” 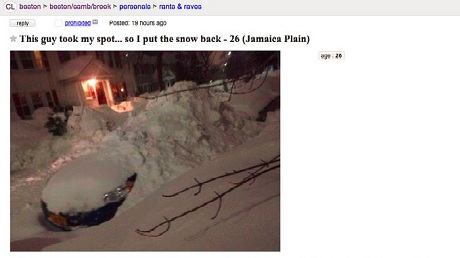 Some facts about time that will make you think.

If you can't view the below video, try http://youtu.be/OhHTqhN3sR8