In Powell, Wyoming, 45 years ago, Mike Peyton and his girlfriend broke up, and in a fit of anger, he threw the class ring she was wearing as far as he could. Bob Thomas, with the aid of his metal detector, found a Powell High School Class of 1968 ring with the initials MP engraved on it. His wife decided to search for the owner and came across the number of Mike’s mother, who returned the ring to Mike last week.

In Lakewood, New Jersey, a 70-year-old man usually picks his own numbers when purchasing lottery tickets. However, when he bought tickets for last Thursday’s Cash4Life drawing, the clerk mistakenly sold him a ticket with computer-generated numbers. Turns out it was a winner. The man and his wife chose the $1 million prize.

In Saugus, Massachusetts, a member of the town’s school committee hit another man with a bag of frozen fish patties during an argument at a veterans’ food drive at the Saugus Senior Center in May. The committee member was charged with assault and battery with a dangerous weapon and has been ordered to anger management classes.

In Forest City, North Carolina, a mother took her 9-year-old son to see Santa. As he was telling Santa what he wanted for Christmas, Santa told him he should “lay off the hamburgers and French fries.” According to the local ABC News station, the boy cried. The Santa apologized, and it isn’t known if disciplinary action was taken. Talk about a “Bad Santa.”

Other uses for straws.

If you can't view the below video, try https://youtu.be/FJ68tngO9Ps

Why men’s bikes have a horizontal crossbar and women’s do not.

If you can't view the below video, try https://youtu.be/icfXPKawzqQ

There’s more than one way to rub a dog.

If you can't view the below video, try https://youtu.be/PrHnDLc7q_k

Looking for an unusual holiday gift? Nordstrom is selling a stone wrapped in a leather case for $85. “A paperweight? A conversation piece? A work of art? It’s up to you,” says the description for the handmade gift. “But this smooth Los Angeles-area stone — wrapped in rich, vegetable-tanned American leather secured by sturdy contrast whipstitching — is sure to draw attention wherever it rests.” Made Solid, the company which designs the leather/rock combo, told BuzzFeed News it was “one of our most consistently popular items, actually” and insisted “it’s not a joke.” The company described the product as “really cool, labour-intensive objects that are used as everything from paperweights to doorstops to home/display accents.” 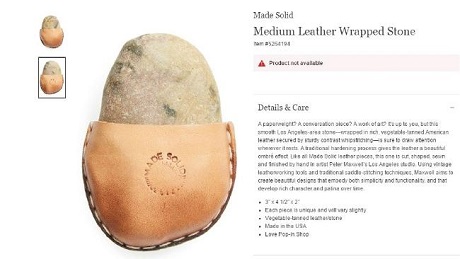 « One-Third of Pre-Retirees Not Saving for Health Care Expenses