In Newquay, Cornwall, England, lifeboat volunteers, a Coastguard rescue team and rescue helicopter all responded to a call of a person struggling in the water. They spent more than 90 minutes searching in the dark before finding a clothed, inflatable blow up doll. Gareth Horner, lifeboat operations manager, told news.com.au the angler had genuine concerns after seeing the clothed inflatable figure. “The caller gave accurate information which led to a successful search and a positive outcome,” he said.

In Amsterdam, police responded to a call by someone who suspected a neighbor was being subjected to domestic viol.ence. When police arrived, they heard what they thought were screams from inside the home. The resident did not come to the door, so police kicked it in. According to the NL Times, that’s when policed discovered the resident was not screaming but was trying to sing along with an opera recording. He was wearing headphones, and did not notice the police at his door.

In Vrnjacka Banja, Serbia, where snow blanketed the town and the temperature was below 19 degrees, a cat found a warm place to be—in a claw-game toy vending machine. The cat was eventually freed, but news.com.au posted this pic. 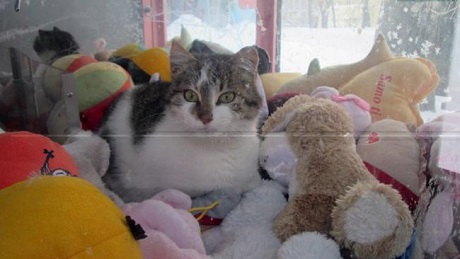 In Omaha, Nebraska, a veteran helps the community get out of the snow with his modified wheelchair. Video.

If you can't view the below video, try https://youtu.be/QFjqHeXnT6I

If you can't view the below video, try https://youtu.be/d7M_pCnEyv8

It was much harder driving a Ford Model T than cars today.

If you can't view the below video, try https://youtu.be/MLMS_QtKamg