In St. Lucie County, Florida, police saw a man sitting in his car in a parking lot. The man revved the engine and started speeding away in reverse, but nearly crashed into a pillar. Deputies spoke to the man, who had a pack of be.er in the front seat. They also saw an open Budw.eiser in the cup holder, but the man denied it was there. During field sobriety exercises, he said, “There is no doubt that I am impaired.” There is also no doubt the man was arrested on a D.UI charge.

In Finleyville, Pennsylvania, a man has been charged with as.sault—over a Big Mac. According to the Associated Press, police responded to a call to a home shared by two brothers. Apparently one brother returned home to find that the other had eaten all three Big Mac sandwiches that were in the house and didn’t save him one. He began knocking over appliances and furniture and throwing food. He also beat his brother, bruising the man’s right eye and left cheek, and cutting his ear.

Exam answers that will make you laugh out loud. My favorite was for “Find x.”

If you can't view the below video, try https://youtu.be/3vF8DVzGxk4

When you’re ineb.riated and the escalator is broken, you wonder why the ride is taking so long.

If you can't view the below video, try https://youtu.be/4LYMu6i8qq4

In Caorle, Italy, a British tourist snapped a photo of parts of his car melting in the extreme heat. 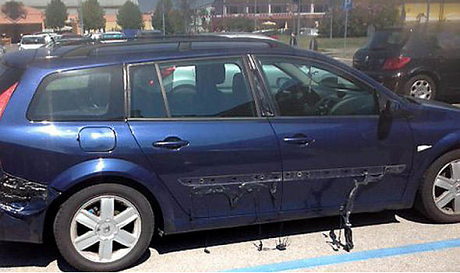 « Are Open MEPs the Silver Bullet?