Plan sponsors with frozen defined benefit (DB) plans are inevitably moving toward plan termination. Without a clear picture of where they stand, they risk unnecessarily delaying the timing of termination and incurring additional costs. Conversely, sponsors that are financially ready but haven’t properly planned could set themselves up for trouble, considering the time-sensitive termination process. As detailed in our five-part article series “Is your Defined Benefit Plan Ready for Termination?,” there are a number of areas in which sponsors need to be sure they are ready before they start the termination process.

As we complete plan termination readiness assessments for plan sponsors, we see a consistent theme. Sponsors are discovering that they are closer to plan termination than they thought. Many accelerate their time frame for termination once they understand what the potential barriers are and develop a clear strategy for dealing with problem areas.

In the case studies below are two real-life readiness assessments. In each, we detail the findings and the actions the sponsors took.

Before we dive in, the following chart provides a quick summary of the four critical areas to consider in order to determine plan termination readiness: 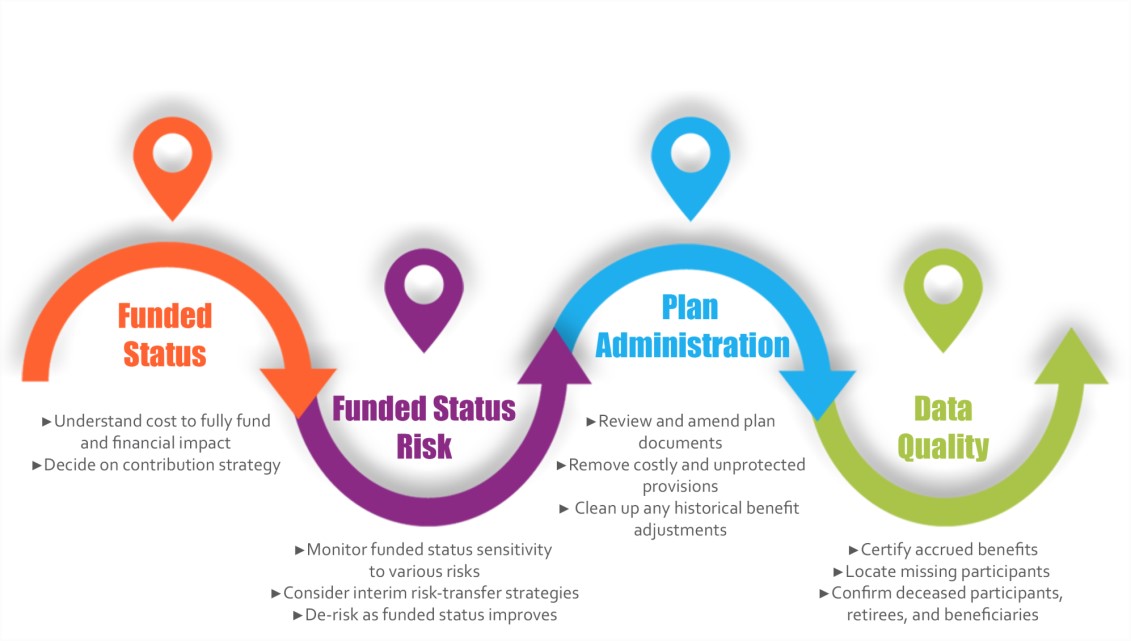 Plan Sponsor A is a large, privately owned manufacturing company that sponsors a defined benefit plan that was frozen to future benefit accruals over 20 years ago. In 2016, the plan sponsor executed a voluntary lump-sum window to terminated, vested participants that settled liabilities for approximately 100 of them. Less than 20% of the remaining participant population is comprised of actively employed or terminated vested participants, so the plan is largely a legacy obligation at this point. Plan termination had always been the goal. However, the funded status on a plan termination basis had never been provided, and the plan sponsor assumed it would be expensive. This left the sponsor uninformed concerning a potential time horizon to terminate.

Funded status – The estimated contribution range to fully fund a standard termination was calculated to be between $4.2 million and $4.5 million. This was lower than the plan sponsor expected. Upon termination, a loss of approximately $2.4 million would need to be recognized in the profit and loss (P&L) statement, which was within a reasonable range for the plan sponsor.

Funded status risk – This area received the lowest score due to risk exposure and potential negative outcomes under the current asset allocation. Stochastic modeling over a seven-year period showed high funded status volatility due to a large exposure to equities (75% of plan assets) and a low interest rate hedge ratio of 18% (e.g. $100 interest-rate-driven change in liabilities would accompany a $18 change in assets). There was a 25% chance the termination contribution could increase by at least $4 million.

Plan administration and data quality – Improvement was needed in both of these areas. There were holes in historical documentation, and benefit election forms had not been updated to reflect recent required disclosures and documentation. Historical participant data to support the frozen accrued benefit amounts were not readily available and will still be needed for plan termination.

End result – The sponsor was able to get a clear picture of where there were issues and what needed to be cleaned up. It now has a better idea of the cash required to terminate and has a concrete plan to get to “termination ready!”

Plan Sponsor B is an insurance company in the Northeast with a defined benefit plan that was frozen to new participants in 2006 and frozen for benefits in 2011. The plan sponsor knew the plan was well-funded and that the company was close to its ultimate goal of termination. The sponsor’s biggest barrier to termination was the final settlement accounting charge to P&L, as profitability needs to be maintained even after including an extraordinary event such as the plan termination. The plan sponsor had added an unlimited lump-sum option to the plan in 2017, but, unfortunately, the prior consultant did not properly highlight the repercussions of a permanent lump-sum feature: When a plan sponsor purchases annuities for deferred annuitants upon plan termination, a lump-sum option can scare away many insurers from bidding and increase the final pricing.

The readiness assessment was completed as a next step to highlight other potential concerns and to educate key decision makers about the termination process.

Funded status – The plan was already fully funded on a plan termination basis under our “realistic” and “optimistic” scenarios (a $196,000 and a $930,000 surplus, respectively).

Under the “pessimistic” scenario, the plan would have to make only a small contribution ($680,000) to fully fund. Upon termination, a loss of approximately $3.9 million would need to be recognized in P&L, which would significantly affect profitability in the year of termination.

Funded status risk – The interest rate hedge ratio was at a high level (90%). The plan still had a small exposure to equity risk, which was unnecessary due to being fully funded.

Plan administration and data quality – Plan administration appeared to be in good shape. However, many responsibilities had been passed to an outsourced administrator, such that the plan sponsor had no clear understanding of how the plan was being run. Most of the data findings were positive. Frozen accrued benefits were calculated, and historical data supporting the frozen benefits were made available. But it was unclear as to whether benefit amounts had been fully certified or communicated to participants.

End result – By recognizing through P&L the plan’s accumulated losses over four years through the strategies noted above, the plan sponsor’s biggest concern was resolved. This helped ensure the settlement impact would not reduce future profitability to negative levels. The plan sponsor had enough confidence and momentum to propose full plan termination to the board of directors, executing a major corporate initiative ahead of schedule. The plan termination is in process and will be completed in early 2020.

These case studies demonstrate the immense value gained from understanding where your pension plan stands today on the termination readiness scale. A readiness assessment helps clear any potential barriers and makes the seemingly daunting decision about plan termination manageable. As the two plan sponsors highlighted here discovered, you may be much closer to terminating than you realize Even if you are not ready to terminate immediately, resolving any issues now and having a strategic plan in place will get you there sooner than you think.

Lauren Meyer, associate director and consulting actuary with River and Mercantile Solutions, is responsible for supporting clients’ day-to-day needs and providing overall consulting about the financial management and workforce implications of retirement plans. She is an enrolled actuary.

Kevin Morrison, director and consulting actuary with River and Mercantile, supports clients in all aspects of their retirement programs, including defined benefit, defined contribution and other post-employment benefit (OPEB) plans. He is an associate of the Society of Actuaries, an enrolled actuary under the Joint Board for the Enrollment of Actuaries, and a member of the American Academy of Actuaries.

This feature is to provide general information only, does not constitute legal or tax advice, and cannot be used or substituted for legal or tax advice. Any opinions of the authors do not necessarily reflect the stance of Institutional Shareholder Service (ISS) or its affiliates.

Awards were given in nine categories representing various plan types and sizes.