The new stimulus bill allows multiemployer plans that are in critical and declining status to get a lump sum of money to make benefit payments for the next 30 years, or through 2051.

Michael Clark, managing director and consulting actuary with River and Mercantile, says plans must file an application for special financial assistance. The Pension Benefit Guaranty Corporation (PBGC) has 120 days from the law’s passage to issue regulations or guidance about the process and specify effective dates.

The legislation says plans can use the money to make benefit payments and pay plan expenses, Clark notes. Multiemployer plans must track the money they have received and earnings on that money separately from other funds. The PBGC will issue rules about permissible investments for the special assistance funds.

Unlike the previously introduced Butch Lewis Act, the payment a multiemployer plan would be able to receive under the stimulus bill is not a loan. “It is a bailout with no obligation to repay,” Clark says. He explains there are two views of the bill. “There is an argument that this will provide benefit security for workers who had nothing to do with the underfunding of these plans. But, on the other side, this is a blank check to cover unfunded liabilities without incentivizing changes in behavior. It doesn’t prevent a plan from getting into this situation in the future,” he says.

However, there are conditions for plans that get money. Clark says the plans receiving assistance cannot prospectively reduce benefits, and they have to continue to pay PBGC premiums. In addition, an eligible multiemployer plan that receives assistance can’t apply for benefit cutbacks under the Multiemployer Pension Reform Act of 2014 (MPRA).

The Pension Rights Center called the multiemployer plan help a reason to celebrate. “To say that we are ecstatic is an understatement,” says Karen Friedman, the center’s executive director. “We have worked with grassroots activists and allied organizations for eight long years to push for a solution to the multiemployer crisis and we are now breathing a long sigh of relief that finally, finally Congress has acted to save their promised benefits. This is a historic day.”

Brian Donohue, a partner at October Three Consulting, explains that Congress set new funding rules for single-employer DB plans in the Pension Protection Act (PPA) of 2006; however, when the 2008 financial crisis hit, lawmakers realized plan sponsors needed help with required contributions. Funding relief was included in the Moving Ahead for Progress in the 21st Century Act (MAP-21)—passed in 2012.

Donohue says the provisions in the current legislation represent the fourth round of relief that takes on a similar pattern: As interest rates have dropped, more relief has been needed. He explains that the relief helps plan sponsors because 25 years ago, interest rates were higher, and higher interest rates used in the calculation of liabilities lowers them, resulting in a lower required contribution.

Donohue says the chart below shows how current relief would end as the corridor rates step down and merge with current market rates. The dotted line represents how the new legislation extends the time to use higher interest rates. “The law describes three rates—first, second and third segment for any given plan—and the effective rate is the average of the three numbers. We’ve taken the typical plan and collapsed the three rates to one rate,” he says. 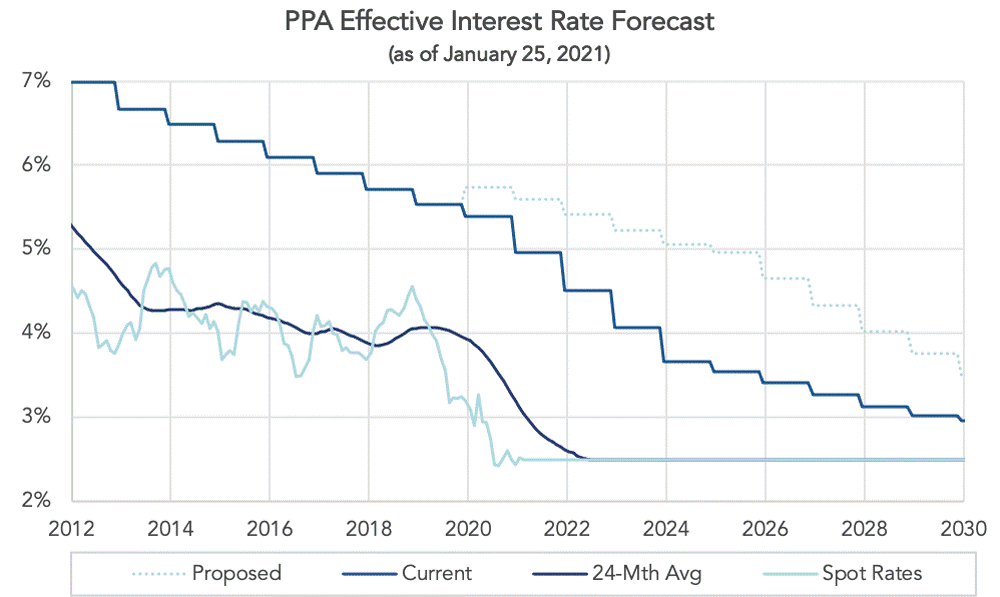 “Under the relief, if market rates stay where they are, DB plans will be using higher rates for the next decade,” he says. “Whenever the lines cross, that is when relief ends. This is huge, good news for DB plan sponsors.”

Clark says the ARPA will bring additional and potentially substantial relief to plan sponsors that are only able to pay the minimum required contribution. Without it, plan sponsors could expect contribution increases beginning as early as 2022. “If no additional relief had come, plan sponsors could expect to see their funding target liabilities that are used in calculating their minimum required contributions increase anywhere from 15% to 25% over the next few years,” he says. “Depending on how well funded a plan is, that could translate into contributions that are upward of 50% higher than the levels from the last few years.”

The single-employer plan funding relief in ARPA adds a floor on any segment rate within the 25-year average of 5%. Clark says this would absolutely kick in for 2021. “The first segment rate based on the 25-year average is 3.9%, so the law would bump up the rate plans can use to 5%,” he explains. “If plans choose to go back to 2020, it would apply there as well since the first segment was below 5%. The floor on rates could have a meaningful impact on plans’ liability calculations.”

Another item in the new stimulus bill designed to help DB plan sponsors is the ability to extend the amortization period for funding shortfalls to 15 years from the seven years provided under the PPA.

“Going back to 2019 is interesting because most plans have already filed their Form 5500 for 2019,” Donohue notes. “It’s not clear whether they would have to refile. We’ll need more guidance from the IRS.”

Donohue adds that the funding relief is also good for plan sponsors looking to settle their liabilities via lump-sum payment windows or pension risk transfers (PRTs). “To meet a threshold for funding, say 80%, plan sponsors may have to accelerate contributions. But with the relief, a funded status of 80% might be easier to reach, so there could be lower cash requirements,” he explains.

Clark says plans that will be helped should start thinking about asset allocations, because if they are contributing less to their plans, they are unlikely to close funding shortfalls. “If they’ll be relying on investment returns to close funding gaps, they will need to think about how to boost returns with downside protection or they will be worse off than when they started,” he says. “They should also examine whether the change in contribution requirements will have a material effect on their future cash flow needs.”

The Senate now has two bills out of committee that will have to be reconciled with a companion House bill...
SPONSORED MESSAGE — SCROLL FOR MORE CONTENT