The majority of employees would welcome retirement income options within employer-sponsored defined contribution (DC) plans, according to a study from the Alliance for Lifetime Income’s Retirement Income Institute.

The study found many employees prefer to have a mix of investments and lifetime income over either traditional pensions or investments alone. Nearly twice as many study respondents prefer a plan that offers a mix (49.5%) to a system that uses only investments (26.5%) or only a pension (24%) to provide income in retirement.

Participants who most prefer a mix of investments and pensions are those who are age 55 and older, those with income less than $50,000, women, Hispanic participants (of any race) and respondents with high investment literacy.

To better understand why three-quarters of respondents value access to guaranteed lifetime income in retirement (including those who favored a pension or a mix of investments and lifetime income), the researchers asked, “Once you retire, which of the following is the most important attribute of a retirement savings plan?” The answer most frequently selected by respondents (31%) was their ability to understand how much they could safely spend. Slightly less than a quarter of respondents value an opportunity for growth and protection against a drop in value during a market decline. About one in eight believed that low expenses and a large number of choices were the most important attributes of a retirement savings plan.

“Since insurance regulation requires investment in bonds to meet expected future income obligations paid to annuitants, it is appropriate to view income annuities as a component of the fixed-income allocation within a retiree’s investment portfolio,” the researchers said in the study report.

Study respondents were also asked about deferred annuities, which allow an employee to buy dollars of fixed future retirement income at a lower price than if they wait until retirement age to buy income. Eighty-five percent indicated that they would be very interested (24%) or somewhat interested (61%) in doing so.

“While prior studies have found evidence of consumer interest in lifetime retirement income, no study has surveyed defined contribution plan participants to carefully gauge demand for a range of possible annuitization options,” says Michael Finke, Alliance fellow and Frank M. Engle Distinguished Chair in Economic Security at The American College of Financial Services. “This research aims to take a deeper look at how participants would design their ideal portfolio, which can help employers better understand their needs.”

The study report, “Participant Attitudes Toward Guaranteed Income in a Defined Contribution Plan,” is available here.

Difference Between Annuities and Mutual Funds 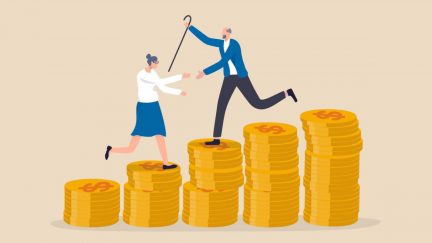 Using Annuities as an Alternative to Bonds to Secure Retirement Outcomes

In a low interest rate environment, annuities provide an option that reduces longevity and sequence-of-return risks.