In Berlin, Vermont, Joanne and William met each other while working at Walmart. So, it just made sense they would get married there. According to Boston.com, the ceremony was set for the employee break-room area with assistant manager Todd Soble, who is also a minister, officiating. But at the last minute, the wedding was moved to the area of the store where fresh flowers are on display.

In Munich, Germany, a man’s dog ruined his chances of carrying a fir.earms license. In 2016, while hunting, the dog managed to release the trigger of a loaded ri.fle lying in the man’s car, shooting the man. Recently, a court decided to withdraw his license to own a rif.le, as well as his hunting permit. According to the Associated Press, a court in Munich dismissed the man’s appeal saying “it must be assumed that he will handle fir.earms and amm.unition carelessly in future as well.”

In Newark, New Jersey, a man sleeping in his car thought he was dreaming, but he wasn’t. The man told the News Journal he had spent a night playing music with friends, went to sleep in his vehicle and had a dream involving someone jumping in his front seat. A Newark police statement says someone drove off in the car and bailed after seeing the man sleeping in the back. The car crashed and the man awoke and realized he hadn’t been dreaming. He says police appeared ready to take him away before another officer said a neighbor had security camera footage of the incident.

In El Paso, Texas, the zoo ran a very popular promotion on Valentine’s Day called “Quit Bugging Me.” According to the Associated Press, the promotion allowed people to name cockroaches after ex-spouses or boyfriends, former friends or anyone else on their “nope” list. On Valentine’s Day, the cockroaches were fed to various animals. Zoo officials said the response to the promotion was so overwhelming they had to cut short the submission period.
No telling what you have to watch out for on the highway.

If you can't view the below video, try https://youtu.be/OFGc1d4cuIQ.
In Colorado Springs, Colorado, a bear didn’t want to just pilfer for snacks, he wanted it all.

If you can't view the below video, try https://youtu.be/pgaTAJrCubo.
In Windsor, North Carolina, a motorist called Bertie County 911 on about a bear hanging off of a garbage truck on U.S. Route 17, according to news reports. Apparently, the bear climbed into the trash truck during a stop and became trapped after the driver secured the netting that prevents garbage from blowing out. A sheriff’s deputy stopped the truck with the bear perched on top. The driver, who hadn't been aware of the stowaway, pulled back the net and the bear ran off. 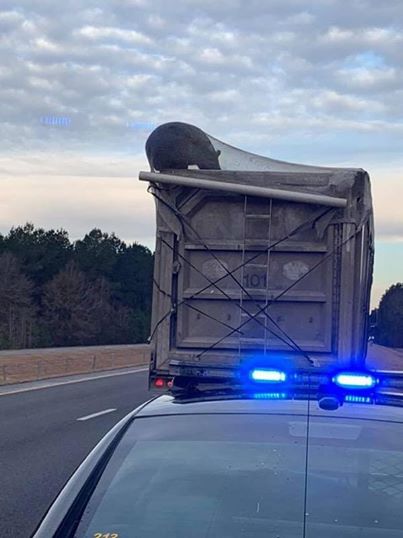 « Participants Stay the Course With Their DC Plans