In Middletown, Ohio, a passerby let a woman’s pet pig out of her yard, and police received calls of the pig roaming the streets. Police caught up with the pig and used their cars to prevent her from going too far. The pig’s owner showed up with its favorite treat—Most Stuf Oreos—to get her on a leash and take her back home.

In Sulphur, Louisiana, police received reports of a man dressed in a gorilla costume looking into people’s homes. When officers caught up with him, he ran into a home. The police discovered him hiding under a bed and arrested him. Yes, drugs were involved.

In London, scientists from the University of Bristol and the University of California at Davis who dressed horses in black-and-white striped coats to help determine why zebras have stripes. The researchers found that fewer horseflies landed on the cloaked horses than on the ones without striped coats, suggesting that zebra stripes may offer protection from blood-sucking insects that can spread disease. “This reduced ability to land on the zebra’s coat may be due to stripes disrupting the visual system of the horse flies during their final moments of approach,” says Martin How, a research fellow at the University of Bristol. “Stripes may dazzle flies in some way once they are close enough to see them with their low-resolution eyes.” While there are other applications for the research, How is using the findings for a human application—he says from now on, he’s wearing stripes while riding his bicycle during horse-fly season.

In Huntsville, Alabama, a wait for crab legs in a restaurant ended with two customers being arrested. A police officer told WHNT-TV diners at the Meteor Buffet had been waiting in line for crab legs for more than 10 minutes, and they lost their tempers once the food came out. He says diners were using service tongs like fencing swords and plates were shattering, and a woman was beating a man. That woman was charged with assa.ult, while the man she was beating was charged with disorderly conduct.
You can even get sports injuries from video games.

If you can't view the below video, try https://youtu.be/gwCRZ9qy3b0.
Why is it so funny to watch people slip on ice (as long as they don’t get hurt)?

If you can't view the video below, try https://youtu.be/goSdL4DfUuE.
This is what can happen when you park in front of a fire hydrant. 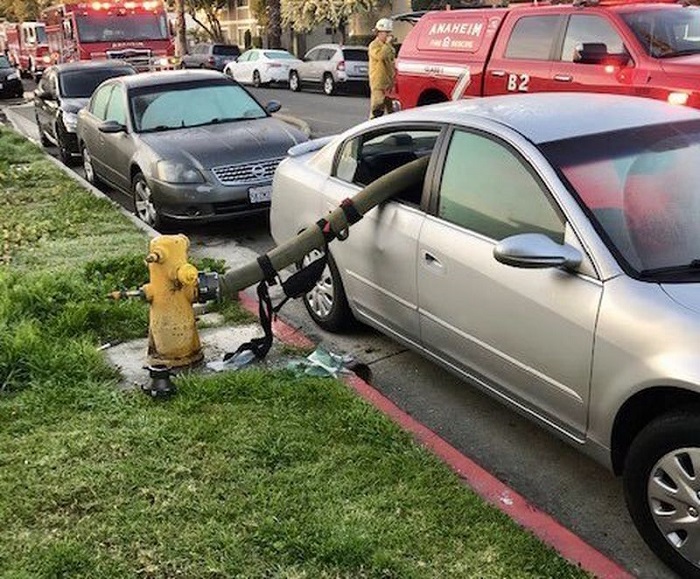