In Severobaykalsk, Russia, a voter in Sunday’s national election decided to show he was bullish on Russia by dressing up as a bear. Russian government-controlled Sputnik News reported that the unnamed voter scared a few people with his loud roar, but that most people seemed amused. Other voters reportedly dressed in costume as well—one as a panda and one as a yeti.

In Philadelphia, Pennsylvania, a car dealership salesman who accompanied a man on the test drive said the man started driving erratically, so he told him to pull over. As the salesman tried to switch seats with the man, the driver allegedly pulled out a g.un and drove off, leaving the salesman stranded on the side of the road.

In Waterboro, Maine, an 83-year-old woman who changed her name to Jesus Christ began a letter-writing campaign 50 years ago “to spread a message of faith and peace,” she said. She recently sent a letter to Oprah Winfrey because she likes her. According to the Associated Press, Gayle King, one of the hosts of “CBS This Morning,” posted about the letter to Winfrey on Instagram, asking if it was the sign her best friend was looking for. Winfrey had said on “60 Minutes” that if God wanted her to run for president “wouldn’t God kinda tell me?”

In Marion County, Florida, a woman broke into a car at a dealership to sleep. While in there, she tossed a cigarette under the front seat, which caught the car on fire. A report from Orlando’s News 6 said deputies were called to the scene for a suspicious incident and found the woman in the car with the windshield shattered. After getting her out of the car, the woman claimed she couldn’t get out of the car, so she began to smash out the front windshield with her hands and feet.

In Eloy, Arizona, during the city’s “Day of the Dinosaurs” children’s activity in its Main Street Park, a woman dialed 911 and asked if there were dinosaurs in the park. The operator said there were and explained the event to the caller. The caller then asked, “Are they real?” according to an audio file provided to The Eloy Enterprise by the police department.
This poor cockatoo has apparently gone crazy.

If you can't view the below video, try https://youtu.be/bUNECHCKWBc.
You’ll never guess what happens when this truck tries to pull a tree down.

If you can't view the below video, try https://youtu.be/qb_464W6fD0.
In Milton Keynes, England, a driver handed a fake license to officers during a traffic stop. It was a driver’s license for Homer Simpson, a character in the adult comedy “The Simpsons.” 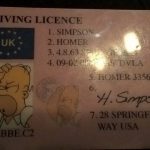