In Pilar, Argentina, a half-ton of pot disappeared from a police warehouse. About 13,000 pounds of bud were supposed to be in storage, but a recent police inspection revealed 1,000 pounds were missing, according to The Guardian. The city’s former police commissioner and three of his subordinates told a judge the missing mari.juana must have been eaten by mice. However, experts said rodents wouldn’t confuse pot with food, and in the off-chance they did, the mice likely would have died from it, and investigators would have found the dead mice. Eight officers were dismissed from their jobs, and will testify in front of the judge on May 4. The judge will then decide if the drugs are missing due to “expedience or negligence,” according to the BBC.

In Royal Palm Beach, Florida, a man was involved in a car crash. He told a sheriff’s deputy he had been cut off by another driver and could prove it with his dashboard camera. He then signed a consent waiver to search the camera, according to the Associated Press. However, the camera showed more than the driver wanted police to see. When the Palm Beach County Sheriff’s deputy reviewed the footage, he saw the man burglarizing a beauty store. Authorities say the video showed the man taking a baseball bat from the trunk and someone using the bat to break the glass door to the store. He was arrested on burglary charges.

In Monroe, Louisiana, police say a woman came home to discover a nak.ed stranger in her tub, eating her Cheetos while taking a bath. The intruder was arrested on burglary and property damage charges. The Fort Worth Star-Telegram reports that a responding officer found “a full tub of water and a plate of food along with half eaten Cheetos belonging to the victim on the toilet next to the tub.” The female intruder told the homeowner and police that an unknown male had told her to break into the house.
In Durham, North Carolina, Bull City Burger and Brewery is currently celebrating “Exotic Meat Month.” The restaurant is featuring burgers made with everything from alligator to iguana, python, bison, turtle and insects. But it’s the tarantula challenge that is gaining the most attention, according to local TV station WRAL. For $30, customers get a 100% North Carolina pasture-raised beef burger topped with Gruyère cheese, chili sauce and an oven-roasted tarantula. And if they finish their plate, they get a T-shirt to immortalize the eight-legged feat, according to Bull City’s website. However, the restaurant purchased only 18 zebra tarantulas so anyone wanting to try the burger has to win a “tarantula raffle” first. 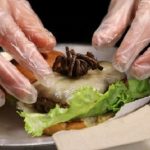 This will teach “Grammy” not to answer the phone.

If you can't view the below video, try https://youtu.be/WDK1MGmfAqY.
Check out these letters children wrote to God.

If you can't view the below video, try https://youtu.be/1LF9q5mO7aE.