In Jiangsu, China, a person who said he had an “intense itch” in his ear went to the hospital. Using an endoscope, the doctor discovered a small spider in the ear, building a web. According to news reports, the spider was too fast to be caught and removed with tweezers, so the doctor had to flush it out.

In Germany, Chancellor Angela Merkel’s government airplane was waiting to take her back to Berlin when an excited fan jumped out of her van to take a picture. Unfortunately, the woman forgot to put her parking brake on and the van rolled slowly into the nose of the jet, according to the Associated Press. The German air force confirmed in a tweet that Merkel had been safely transported back to Berlin by helicopter.

In Lihue, Hawaii, in December, a man broke into his former boss’ home and threatened to kill and chop up the former boss and his wife with a machete. When police were at the scene, the man told them his former boss owed him fish that they caught together. “He owes me choke ahi,” he told police, according to the Associated Press. Recently in court, the man pleaded no contest, saying he was under the influence of a hallucinogenic at the time.

In San Diego, California, the Humane Society has five new kittens that will soon be ready for adoption. Construction workers building new Kaiser Permanente medical offices heard meows coming from a steel column. They tilted the column and the week-old kittens slid out. According to the Associate Press, they apparently were stowaways in a truck from Hayward, California.
Helpful cooking tips.

If you can't view the below video, try https://youtu.be/OF72d0xzJy0.
This sign gives fair warning to trucks about the height of an upcoming bridge. 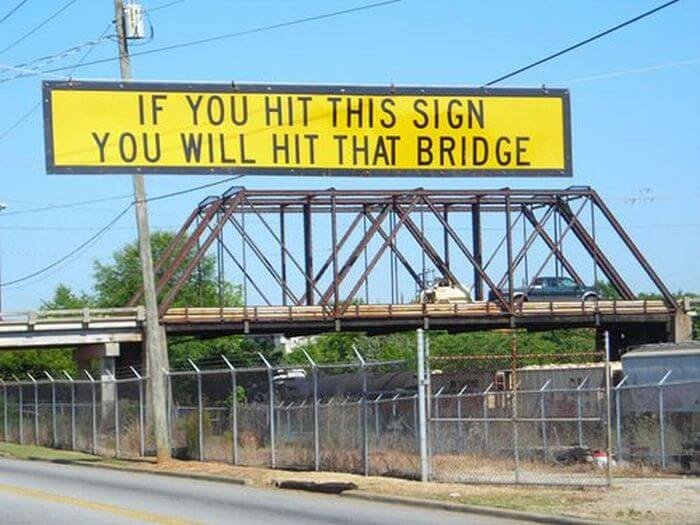