In Putnam County, Florida, a man purchased some crystal meth from his dealer that he thought wasn’t exactly up to speed. So, he contacted the sheriff’s office, saying he wanted the drugs tested because he had a “bad reaction,” according to The Smoking Gun. Investigators said Kelly wanted to “press charges” against the person who sold him the ill.egal drug a week earlier, so the drug unit detectives invited him to come in and have it tested, according to the South Florida Sun Sentinel. When he went to the sheriff’s office and allegedly gave detectives a crystal-like substance wrapped in aluminum foil, it tested positive for metha.mphetamine. The man was arrested and taken to the Putnam County Jail.

In Winsted, Minnesota, a young woman got her head stuck in a truck’s oversized tailpipe at a music festival. Firefighters used a power saw to free the woman from her predicament. KARE-TV reports that it’s unknown how she ended up with her head in the tailpipe, but alc.ohol may have been a factor. The McLeod County Sheriff’s Office says she was cited for underage drinking and escorted out.

In Paris, France, a baby boy was born in a suburban train run by Paris public transport company RATP. Many citizens welcomed the birth on social media, but others complained about train delays. Nevertheless, the company issued congratulations to the baby’s mother and announced that the baby boy will get free rides in the French capital until he is 25, according to the Associated Press.

In Pine Bluff, Arkansas, a man dining at Shannon’s Restaurant handed the waitress a credit card to pay for his bill. According to the Associated Press, a police spokesman said the waitress noted that it was her own credit card that had been stolen, and she called police. Officers found other items on the man—including her Social Security card and driver’s license—that had been in the waitress’ purse when it was stolen from her car at a nearby gas station while she was inside.
In New York City, a man’s daughter and granddaughter took him out for a happy Father’s Day meal, but in the end it wrenched his gut. When he got the receipt, along with the request to add caramelized onions and mayo to the burger was this, “PLEASE SPIT IN IT TOO.” “I ate my burger already. I felt like I was gonna throw up,” the man told WABC TV. 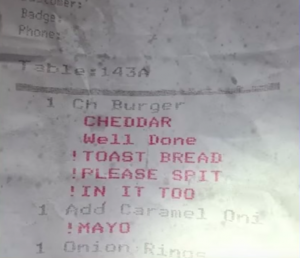 Cat says, “It looks the same, but why do I keep falling through?”

If you can't view the below video, try https://youtu.be/KbGtNIP5vng.
The wind is truly terrible if you have to watch out for flying porta potties.

If you can't view the below video, try https://youtu.be/-35-hdWUZuk.