In Philadelphia, Pennsylvania, a Phillies fan got a black eye during a game. No, it wasn’t from a foul ball; it was from a frankfurter shot out of a hot dog-shaped cannon into the stands above home plate by the team’s mascot, Phillie Phanatic. “It came down with such force, like a ton of bricks,” she told Inside Edition. “My glasses flew off, and I started bleeding.” The Phillies apologized to the woman and offered her tickets to a future game. She says she’s such a big fan, she is not going to sue.

In Tuku, Finland, as part of a promotion by Fortum, a clean energy company based in northern Europe, music festival attendees will be able to ride around the festival grounds in an electrically-powered BMW i3 for free. The catch is that they have to sing for the driver and keep singing or the ride is over. According to the Huffington Post, the car has a tablet that offers song choices and lyrics.

In Kirkwood, Missouri, a minivan driver pulled away from a gas pump with the nozzle still attached. According to the Associated Press, a Kirkwood Police Detective says a valve is supposed to shut off when that happens, but instead fuel sprayed into the engine of a nearby Lamborghini, causing it to erupt in flames. The Lamborghini driver was inside the gas station getting a water at the time. The detective says it was “completely an accident” and no one was charged.

In Hudson, Florida, a couple were rushing to finish the yard work in time to avoid a fine from their homeowner’s association when the husband had a heart attack. The wife said her husband was so worried about meeting the deadline that while he was drifting in and out of consciousness on the way to the hospital, he begged her to keep the grass from dying. According to the Associate Press, the rescue team took notice. After leaving the couple at the hospital, seven firefighters returned to their home and finished the job.
In Poland, historian and political scientist Jerzy Targalski was speaking to Nieuwsuur ‏journalist Rudy Bouma about Poland’s Supreme Court crisis when his cat decided to join in. Bouma said Targalski was “completely unruffled” by the interruption. 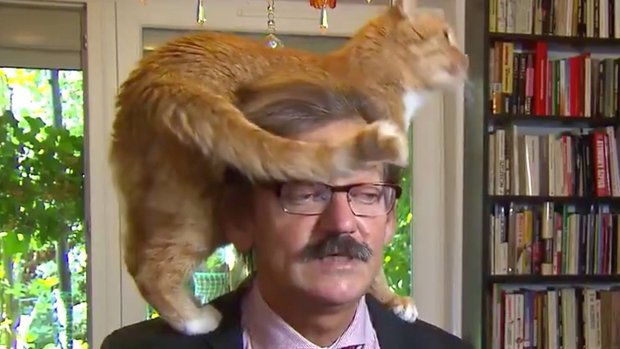 This little boy thinks the command, “Sit!” is for him.

If you can't view the below video, try https://youtu.be/LLWbKFKzQFA.
Apparently, his sister does not appreciate his singing.

If you can't view the below video, try https://youtu.be/L1mp21PxDb4.