In Pittsford, New York, a woman was shopping for groceries when her daughter noticed a snake wrapped on the bottom of her cart. A lot calmer than I would be, the woman then walked the cart outside and had her daughter tell customer service there was a snake on it, the Rochester Democrat & Chronicle reports. Two employees took the snake to a wooded area. A biology professor identified the pictured snake as a non-venomous milk snake.

In Thermal, California, someone really likes lemons. Riverside County sheriff’s deputies were investigating recent farm thefts when they stopped a 69-year-old man’s car. They found about 800 pounds of stolen lemons inside.

In Alliance, Ohio, a person discovered a hornets’ nest in their car. But, it wasn’t just any hornets’ nest; it was a massive one built by European Hornets, which can be two inches long. The owner of The Bee Man was called into action. He told WJW-TV that the hornets aggressively defend the nest and can sting repeatedly. He wore a triple-layer suit and sting-proof gloves while he blew a powder into the nest and disposed of it.

In Patrick County, Virginia, a federal judge told a Virginia sheriff’s deputy that he had no right to pull over a car because a passenger flipped him off. “People do not wave inappropriate or obscene gestures to a law enforcement officer unless something is wrong,” the deputy said in a deposition. However, the judge found the deputy had shown a clear violation of the passenger’s constitutional rights under the First and Fourth Amendments.
A whale’s version of driving through puddles next to pedestrians.

If you can't view the below video, try https://youtu.be/cIIiXPdesWc.
In Caledon, Ontario, Canada, Batman gets a pass from complying with driving laws.

If you can't view the below video, try https://youtu.be/81QVNSvTWbg.
In Omro, Wisconsin, a motorist was having car trouble, so he pulled over and opened the hood of his SUV. What he found was startling—a 4-foot-long ball python. 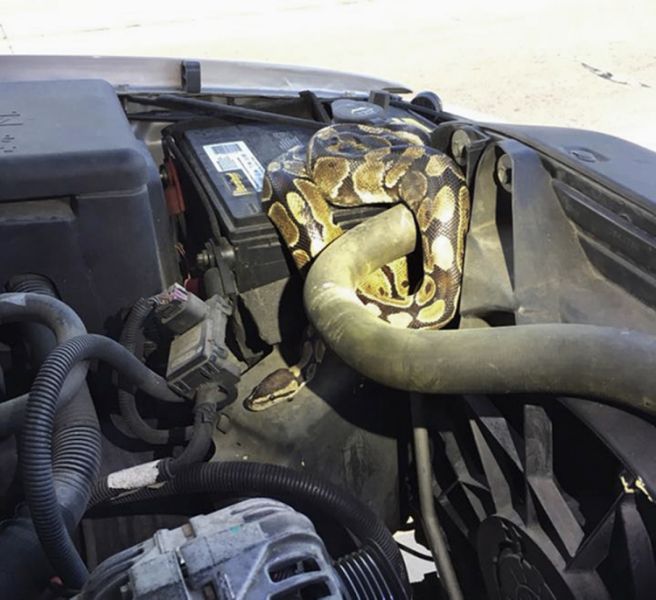