In Nisku, Alberta, Canada, Royal Canadian Mounted Police Cpl. Laurel Scott says officers responded to the report of a car colliding with a truck. When they arrived, they found that five people in the car were naked. The five were arrested. According to the Associated Press, Scott said she’s not sure of the charges, though police consider it a “purposeful collision.” She also called the incident “very bizarre.” Police said earlier they believe drugs or alc.ohol may have been a factor.

In Lakeland, Florida, Polk County Sheriff’s officials said in a news release that someone called 911 about a woman who appeared confused and possibly in danger. When deputies arrived they found the woman riding her horse in the road. The Associated Press reports that officers did a sobriety test and said she gave breath samples that registered blood-alcohol level of .161—twice Florida’s legal limit of .08. She is charged with DUI and animal neglect for endangering and failing to provide proper protection for the horse.

In Berlin, Germany, a worried resident in Germany alerted police to what he thought was a World War II bomb in his garden. Police said in a statement that officers determined “the object, which really did look very like a bomb” was actually a 40-centimeter (nearly 16-inch) zucchini, according to the Associated Press.

In Wake Forest, North Carolina, a woman bought a lottery scratch-off ticket at a grocery store last week and won a $10,000 prize. She went to the lottery headquarters in Raleigh to claim her prize. On the way home, she stopped and bought another ticket, and scratched off a $1 million prize.

In Fairbanks, Alaska, a man who stole a motorized shopping cart from a grocery store found it was not the best getaway vehicle. The cart has a top speed of 1.9 mph. According to the Associated Press, police say they stopped the man while he was crossing a thoroughfare following a 10-minute joyride that consisted mostly of trying to leave the expansive store parking lot.

In Clackamas, Oregon, a deliveryman heard a woman’s screams for help from a home and had his wife call 911. The Oregonian/OregonLive reported that when a Clackamas County Sheriff’s Deputy showed up, he found the screamer was the woman’s parrot.
This little girl is not allowed to have a boyfriend until she is 50.

If you cannot view the below video, try https://youtu.be/GqGr2Bn4HJw.
In Tyneside, England, a two-year-old beagle developed a cyst after dirt got in his ears. The owner photographed the infected ear to show her vet, but a friend who saw the photo saw something else: The image of Donald Trump. 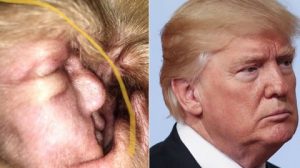