In Werl, Germany, it wasn’t snow firefighters had to shovel. T tank at a local firm making liquid chocolate overflowed and poured out onto a street. “About a ton of chocolate ran out into the yard and from there onto the street,” a spokesman for the Werl fire department said in a statement, according to Reuters. The firefighters closed off the street and shoveled the chocolate—about 10 square meters (108 square feet)—to one side before a specialist cleaning company cleaned the road.

In Hallowell, Maine, a restaurant owner is fighting not to have boulders removed from in front of her business for a sidewalk project. She said in a public meeting the boulders were placed according to feng shui, a belief system about spatial arrangement that relates to flow of energy. The city’s highway committee is looking into the sidewalk change, the Associated Press reports.
In Friedberg, Germany, the town where Elvis Presley was stationed as a U.S. soldier in the 1950s has installed three pedestrian lights with images of him. 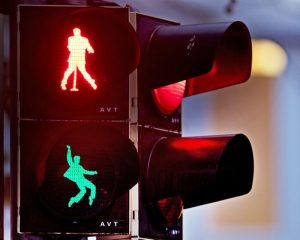 If you can't view the video, try https://youtu.be/oi2M9HRSUME.
In the Netherlands, a French runner at the European Cross-Country Championships wanted to win with flair. He tried to slide through the finish line while waving French flags, but it didn’t work out. At least he won.

If you can't view the below video, try https://youtu.be/3sbXW-mIX9k.

« Americans Optimistic About Their Financial Prospects for 2019