Flight of the Bumblebee on alternative instruments, UPS delivery on ice, a tumbleweed pileup, and more.

Not snow, but tumbleweeds, was the reason a Washington state highway was closed in both directions Tuesday night after several cars became trapped. Vehicles were trapped in a pile of tumbleweeds that stood up to 15 feet tall. The state Department of Transportation used snow plows to clear the scene. 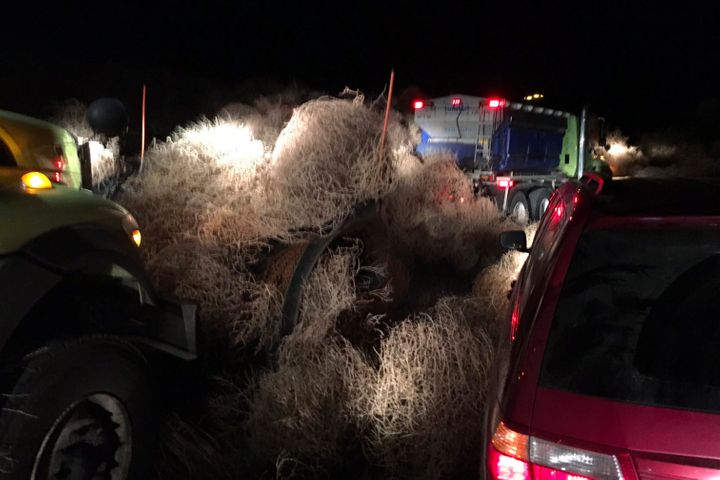 In High Point, North Carolina, a couple was awakened one night recently by noises that sounded like someone moving around the house. According to the Associated Press, they hid in the closet and called 911. Responding sheriff’s deputies searched the home, and found the culprit. A robot vacuum had seemingly started, gotten stuck and was beeping and banging.

In Sand Springs, Oklahoma, a carjacker was arrested for kidnapping. A man had stopped at a store in Carthage, Missouri, and went in while one of his passengers was sleeping. When the sleeping passenger’s awoke, a masked man was driving the car. The masked man drove all the way to Oklahoma before releasing the passengers—the sleeping man and a goat.

In Wausau, Wisconsin, the city is considering taking snowball fights off the naughty list. A 1962 ban on throwing projectiles in Wausau lumps snowballs into the same category as rocks and other items that can cause serious harm, according to the Associated Press. City Council President Lisa Rasmussen said recent negative national attention over the rarely used ordinance has raised questions about whether it should be changed. “Maybe it’s worth giving a look to see if that list could be amended, to mitigate that odd news story that keeps coming up like a bad penny,” Rasmussen said, according to the news report. Deputy Chief Matt Barnes told Wisconsin Public Radio News the department has used the ordinance to write about 10 tickets in the last 15 years. The citations included cases of people shooting crossbows into a neighbor’s yard, dropping sandbags off the roof of a downtown parking ramp and, on two occasions, throwing snowballs at passing cars. The City Council will consider decriminalizing snowball fights at a meeting this month.

For your listening pleasure, “Flight of the Bumblebee.”

If you can’t view the below video, try https://youtu.be/WzucpFgi7Xk.

If you can’t view the below video, try https://youtu.be/Q_WrhIgNHS8.