There are requirements for a qualified domestic relations order (QDRO) that apply whether the QDRO is for splitting up defined contribution (DC) plan assets or defined benefit (DB) plan assets, notes Lisa Loesel, partner at McDermott, Will & Emery in Chicago.

However, the mechanics of setting up QDROs vary between DC and DB plans.

A QDRO typically happens when a couple divorces; retirement plan benefits may be given to an ex-spouse or to a child. Loesel says a QDRO has to be issued pursuant to a state domestic relations order (DRO). It has to include the alternate payee and the plan participant’s name, address, and Social Security number. She notes that, for privacy reasons, sometimes this is included in an addendum.

The DRO must also answer these questions in order to be a QDRO:

Erika Lorenson, senior director, defined benefit foundation leader in Alight Solutions wealth business in Lincolnshire, Illinois, says that similar to QDROs for DC plans, ones for DB plans cannot require any kind of provision that doesn’t otherwise exist in plan. For example, if lump-sum distributions are not available to the plan participant, they are not available to the alternate payee.

Plan sponsors may receive DROs that do not answer all these questions. For example, Loesel says a DRO may say it applies to the X Corporation Retirement Plan, but the company has more than one plan. She says the best practice is for a divorce attorney to complete the DRO and to ask the plan sponsor for a model QDRO to fill out.

According to Diana Jacobson, senior director, defined contribution foundation leader in Alight Solutions wealth business, a plan having a model order available to parties will help plan sponsors. “Even if the parties don’t use it in totality, they may use elements of it. It helps the parties know what needs to be provided,” she says. “A model could also assist parties in reducing legal fees and getting the QDRO done faster.”

Jacobson adds that the process can be complicated and there are organizations that specialize in QDRO review and approval. Alight is one, but there are others. “A vast majority of our clients engage a specialist for review,” she says. Lorenson says a specialist may include Employee Retirement Income Security Act (ERISA) counsel or a recordkeeper.

If there is no model, Loesel says, the next best option is for attorneys to submit a draft order before asking a court to qualify the DRO, and ask the plan administrator if there are any questions or deficiencies. “But, sometimes this doesn’t happen. Sometimes the DRO is already entered and approved by the court,” she notes. “If it doesn’t make sense, sometimes plan sponsors make difficult interpretations and document them to the participant and alternate payee. Otherwise, plan sponsors can ask the alternate payee to go back to the court and get clarification.”

When a plan sponsors receives a QDRO, the assets of the participants account must be put on hold from any distributions until the assets are split.

Lorenson says the two biggest differences between processing a QDRO in a DB plan and processing one in a DC plan are the point in time at which the account can be split and the degree of independence the alternate payee has post-split.

Loesel says the earliest an alternate payee may be allowed to commence distribution of benefits is the earliest retirement age under the plan. If the participant doesn’t commence benefits at early retirement, there should be provisions in the plan about calculating the payee’s benefit. However, Loesel says she thinks it would be better if the QDRO mandated how benefits should be calculated in this case.

The QDRO should be clear about whether it is a stream of payment QDRO or separate interest QDRO, says Loesel. A stream of payment QDRO exists when a participant is already in pay status. The annuity stream will be split based on the QDROs provisions for the remainder of the participant’s life. “This is far and away the simplest DB plan QDRO, but also the least common,” Loesel says.

The QDRO should explain what happens when each party passes away—if the participant predeceases the payee and vice versa, what happens before the commencement of benefits and what happens after? “The QDRO should be crystal clear about whether the participant gets his full benefit back if the alternate payee dies prior to the commencement of benefits,” Loesel says. The alternate payee, except in a cash balance plan, has no way to designate a beneficiary. Does the benefit just vaporize? There is no good guidance on this.”

If the participant dies first and he has a new spouse, the spouse gets his benefit. However, there is no specific guidance about what happens if the participant dies first and is unmarried, according to Loesel. “The school of thought is that the alternate payee should be treated as a surviving spouse, in which case he would get the 50% survivor annuity portion,” she says. “However, ideally, the QDRO will walk through each scenario.”

Loesel notes that it depends on the DB plan sponsor’s internal processes whether it turns to an actuary for benefit calculations when a QDRO is received. Sometimes the actuary will weigh in on whether the QDRO is in good order and asked to be contacted when the participant and/or alternate payee is ready to get benefits. However, she notes, sometimes the actuary gets involved to send the alternate payee a benefit estimate and send the participant a revised benefit estimate. “There is no legal requirement to get an actuary involved,” Loesel says.

Many DB plan sponsors are considering offering lump-sum windows to eliminate some of their plan liability risk. Both Loesel and Lorenson say in this case, plan sponsors may decide whether or not to include alternate payees in the offering.

Loesel stresses that the first thing DB plan sponsors should do if they receive a DRO is read through it to make sure it makes sense and the plan sponsor understands its intent. If it is clear, it can be qualified. If it is not clear, plan sponsors can either ask for clarification, or if terribly unclear, tell the parties to go back to court to have a new DRO created.

Lorenson highlights how much value there is in having model QDRO language available to participants, alternate payees and their counsel. “It helps get them started and limits the back and forth that may be needed to get a DRO to be a QDRO,” she says. 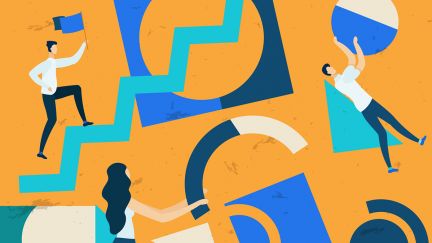 Plan sponsors can trust advisers to help with committee decisions and training and expect input from ERISA attorneys.

Older couples and women, in particular, are often put at a retirement disadvantage when faced with a divorce, a GAO...

Tips for When the QDRO Process Is Held Up