In Marana, Arizona, a woman who apparently decided to imbibe to calm wedding-day jitters didn’t make it to the wedding—at least not on time. Police responding to an accident arrested the bride in her gown for a D.UI. The woman was booked, her blood sample extracted and she signed a criminal citation to appear in court later, reports say. She was released to her fiance. There was no report of whether the two went ahead with the wedding.

In Miami Beach, the city shut down a nightclub after video shows a horse being ridden onto the dance floor. A video on social media, shows a man trying to pull the reluctant horse into the club, with a man and woman riding the animal. A second video shows only the woman—dressed in a bikini—riding on the animal amid a tight crowd of people. The horse threw the woman off and continued walking through the crowd. A city press release cites the incident as being a hazard to public safety and possible animal cruelty.

In Boston, Massachusetts, a police department wagon got stuck on a snow bank, but a heroine (of sorts) was nearby to help. A 37-year-old attorney dressed as Elsa from “Frozen” emerged from a nearby bar to help push the vehicle out. The Boston Globe reported that the man purchased the getup last winter and put it on that night to entertain his friends.

In Fayetteville, North Carolina, a veteran’s wife realized something was wrong when a monthly disabilities payment was not deposited in her and her husband’s bank account. They were surprised to learn that the husband had been declared dead by the Veterans Affairs Department last month. A death certificate for someone with the same name was filed in January. According to the Fayetteville Observer, the VA says the mistake has been corrected.
Not recommended for those who use a mobility scooter.

If you can't view the below video, try https://youtu.be/kcPMBjeALec.
Not only does this take coordination, but it makes walking on the treadmill much more fun.

If you can't view the below video, try https://youtu.be/-pRjmJdCZW0.
A new game to play with your cat—if you don’t mind a few scratches, and maybe a nibble.

If you can't view the below video, try https://youtu.be/L1EPKMhNkdE.
Does this dog’s face look human to you? 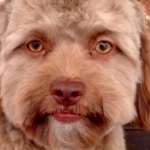