In Bakersfield, California, a woman has filed a lawsuit against her former employer, claiming she was fired for disabling an app that tracked her 24/7. The former sales executive for money transfer service Intermex claims that her boss fired her shortly after she uninstalled the job-management Xora app that she and her colleagues were required to use on their company-issued iPhones, arstechnica.com reports. According to the lawsuit, the woman and her co-workers asked whether Intermex would be monitoring their movements while off duty. The boss admitted that employees would be monitored while off duty and bragged that he knew how fast the woman was driving at specific moments ever since she installed the app on her phone. The woman likened the app to a prisoner’s ankle bracelet and informed her boss that his actions were illegal, to which he replied that she should tolerate the illegal intrusion.

In Mount Morris, New York, owners of Build-A-Burger told the Livingston County Sheriff’s Office that their surveillance system and cash register had been stolen early one morning. Deputies checked out a nearby hiking and biking path, where they found cash register parts, surveillance system parts, rubber gloves, loose change and “a steady trail of macaroni salad,” the Associated Press reports. Police say they later learned that three men had stolen a large bowl of the salad and took turns eating it while making their getaway.

In Beaver, West Virginia, a 43-year-old man went into a pharmacy wearing full camouflage and a paintball mask. The Associated Press reports that the would-be robber started spraying pepper spray in an effort to take down employees, but walked into the cloud of pepper spray in front of him. He staggered out of the business and got into a vehicle. Police investigating the incident discovered the name of the man who was driving the vehicle, and the driver identified the suspect.

In Coventry, Vermont, the latest Mother of the Year award contender—NOT!—has been charged with reckless endangerment and child endangerment. A concerned citizen showed police video of a Subaru station wagon driven by a man, with a woman and 5-year-old child on top. WCAX News reports that police say the car reached speeds of 50 to 55 mph during the two-mile ride. The child has been taken into protective custody.

In Xuzhou City, in east China’s Jiangsu Province, a 74-year-old man swears his cat gave birth to a Chihuahua. He says he took the cat to his friend’s house personally for her to mate, the UK’s Metro reports. She was put in a cage with a male cat for two days. But, he says he is certain he hand-delivered a Chihuahua. “This is very confusing. I hope the media reports this and we get some sort of explanation from a scientist,” he said, according to the news report. 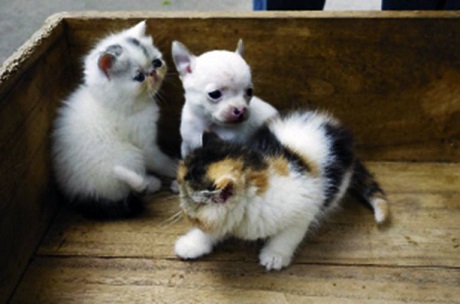 One of the potential hazards of living to see your 102nd birthday.

If you can't view the below video, try https://youtu.be/vXV3wVE5xgU

Whether they like the house or not, potential home buyers won’t forget this house tour.

If you can't view the below video, try https://youtu.be/kcJijx8RIMM

This is how your tooth gets pulled when your father is an Olympian javelin thrower.