And, speaking of Trump, in Seattle Washington, a driver was pulled over for driving in the carpool lane with a fake passenger. According to the Associated Press, the driver had pasted a cardboard head of Donald Trump to the passenger-side head rest. The driver was ticketed for $136.

In Portland, Oregon, a woman decided to jump out of her car and literally ditched it—a spider had dropped into her lap from the rear view mirror. Fortunately, she only suffered minor scratches, CNN reports.

In East Lansing, Michigan, a professor at Michigan State and urological surgeon kept hearing anecdotal reports from patients who had passed small kidney stones during and immediately after visiting the Disney theme parks. He decided to do his own experiment. The Atlantic reports he used a 3-D printer to create a clear silicone model of that three-time-stone patient’s kidney. He then filled the kidney with stones and urine. He and a colleague went to the Disney resort in Orlando and rode Big Thunder Mountain holding the kidney model between them at “kidney height.” After 60 rides, it was confirmed that kidney stones passed during the ride; however the surgeon noted that there was a huge difference when sitting in the front versus the back of the rollercoaster. The stones passed 63.89% of the time while the kidneys were in the back of the ride. When they were in the front, the passage rate was only 16.67%.

In Xinjiang, China, a woman was pulled over for suspicion of dru.nk driving. A breathalyzer confirmed she was into.xicated. But, as police took her picture, she was less concerned about the charge than her looks. She demanded that the officers use Meitu, a popular photo editing app, to make her look better.

In a bit of irony, in Rizhao, China, a rock slide severely damaged a park days before it was to open. The facility’s new rock climbing facility was completely wiped out by the rock slide.

One lucky guy was barely missed by a truck that ran through a roundabout.

If you can't view the below video, try https://youtu.be/D3qv-9qCHDE

In Glasgow, Scotland, watch out for giant ducks.

If you can't view the below video, try https://youtu.be/Y7hw9-CtJno

The “flannel moth caterpillar,” or “megalopygidae” to the science community, strangely looks like Donald Trump’s hair. 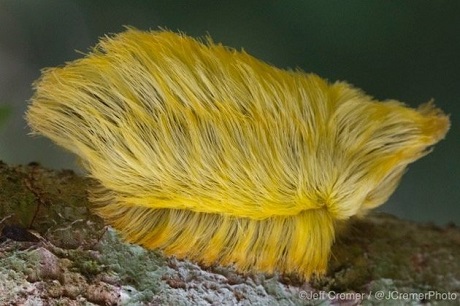