In Bali, a plane was forced to make an emergency landing after smoke alarms went off. The Aviation Herald reports the cargo flight from Australia to Kuala Lumpur, with four crew and 2,186 sheep on-board, was flying just to the south of Indonesia when the smoke alarms sounded. Emergency services didn’t find any trace of fire or smoke and identified the cause to be the result of gasses and man.ure produced by the sheep. The plane and its cargo were able to depart the island about three hours later.

In Saugerties, New York, a woman called 911 to report a medical emergency. An ambulance arrived and transported her to a hospital in Kingston. However, she signed herself out of the hospital shortly after arriving, the local ABC News station reports. Turns out she was just using the ambulance to get to Kingston so she could see her boyfriend. She has been charged with falsely reporting an incident.

Ants can be a solid or a liquid.

If you can't view the below video, try https://youtu.be/B0QVXVgcdhs

We have been using tape measures all wrong!

If you can't view the below video, try https://youtu.be/TkoCWUJt10w

Somewhere in the UK, a child gave a funny exam answer when he was asked to “show your thinking.” 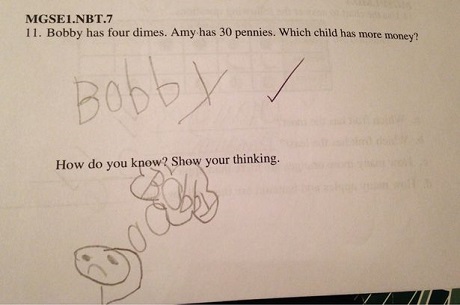 « Investment Product and Service Launches for the Week