In Ngawha, New Zealand, a 23-year-old pulled over by police thought he would be clever and give officers a fake name. However, a person by the name he gave them was wanted for breaching bail conditions, so officers took him to jail. Officials eventually found out who he really is, but unfortunately, he is still in jail for driving while disqualified, giving false details and per.verting the course of justice.

In Lyden, Washington, the Washington State Patrol responded to a report of an elderly woman riding her scooter in circles on a stretch of highway. A trooper said the woman told him she had been riding around in circles because she was lost. According to UPI, the trooper drove behind the woman at 6 mph to escort her to her home four miles away. Kudos to him!

In Fort Lauderdale, Florida, a 19-year-old called 911 to report she had been cheated during a purchase—of mari.juana. A deputy went to the woman and found another drug in her pocket. She’s been jailed for poss.ession and misusing the 911 system.

In Presque Isle, Maine, a woman climbed 75 feet up a tree to rescue her cat. Once up there, she panicked and called 911 for help. According to the local ABC TV station, the fire department came with a ladder truck and brought her to safety. The cat ended up climbing down on its own.

The Queen’s guards are coming; if you know what’s good for you, you’ll MAKE WAY!

If you can't view the below video, try https://youtu.be/NTr50aHGDnI

Oh those guards for the Queen, if they aren’t marching into pedestrians, they’re smacking little kids in the head.

If you can't view the below video, try https://youtu.be/fF6LmBebn7o

In Benton, Arkansas, police finally caught a fugi.tive suspected in a shooting. The highlight of the story is the irony on his T-shirt. 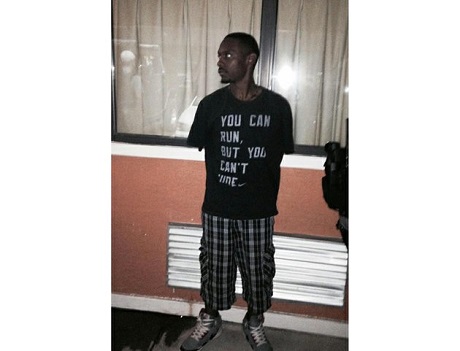