In Munich, Germany, a man has found a faster way to get to work without all the traffic hassles. According to Reuters, he used to go to work via bus, bike, car or on foot, but now he swims there. The beer garden worker now packs his laptop and clothes into a waterproof bag which he puts on his back, dons his wetsuit and slides into the River Isar for his journey. He admits that he does this mostly in the summer, as the river water is very cold in winter.

In Danvers, Massachusetts, police received several calls about an alligator along Route 128. When they went to investigate, they found it was a foot-and-a-half plastic toy discarded by the side of the road.

Somewhere in Australia, in a bit of irony, a man bought a Rolls-Royce a couple of weeks ago, but decided the parking garage at his luxury apartments was not secure enough to protect his prize. He a custom cage built surrounding his parking space to protect the vehicle. However, the man had trouble navigating in and out of the cage and ended up driving into one of the cage’s support poles and walls, causing a large amount of damage to the car.

In Aptos, California, in another bit of irony, an into.xicated man lost control of his vehicle on a highway, ran over a road sign, careened up an embankment, flipped and landed on the roof of the car. He survived the crash. The sign he ran over: “Report drunk drivers Call 911.”

This dog’s Frisbee miss didn’t fare well for the guy holding the camera.

If you can't view the below video, try https://youtu.be/DgZ9_T-dAnU

This chicken, not once, but twice, gets his bread treat stuck around his neck. (May want to mute due to annoying laughter.)

If you can't view the below video, try https://youtu.be/-OaagtJ8dvo

In Malmedy, Belgium, the town has turned nearly 10,000 eggs into a giant omelet for the whole community. Cooks and volunteers whipped up the massive concoction using enormous wooden utensils, an oversized and oiled pan, bacon and green onions. According to the Associated Press, they then distributed it to the public. It's an annual event in the town of Malmedy that took on greater meaning this year, as several European countries have reported receiving eggs or egg products contaminated by a pesticide. No one has fallen ill from the eggs and health risk is considered low. 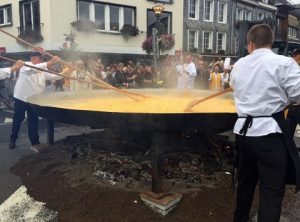 In Alberta, Canada, a Canadian woman lost her engagement ring 13 years ago while weeding her garden on the family farm. But, her daughter-in-law found the ring recently while harvesting carrots for supper. According to the Associated Press, a carrot actually grew through and around the diamond ring the woman had long given up hope of finding. 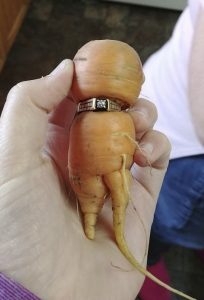 Well, here’s a thousand to get you going…

– – – In Saskatoon, Saskatchewan , Plantraco Microflight says a certain new Halloween costume is practically “flying” off the shelves – – – it’s a “balloon boy” costume – – – with a mini silver helium balloon attaches with a string to the gondola-like compartment – – – and a cardboard box kids cut holes into and put over their heads.

- - - In Lansing, Michigan , Sean Murphy, an employee at Preuss Pets here - - - has unofficially broken a world record - - - having managed to fit 16 Madagascar hissing cockroaches into his mouth for a total of 10 seconds - - - the current world record is 11 cockroaches - - - you can watch this below

If you can't view the below video, try http://gannett.a.mms.mavenapps.net/mms/rt/1/site/gannett-lansing-051-pub01-live/current/launch.html?maven_playerId=articleplayer&maven_referralPlaylistId=playlist&maven_referralObject=1306626751

- - - In Nashville, Tennessee , the local police department is auctioning a confiscated "set of custom made teeth grills" - - - with the proceeds of the sale earmarked for the Police State Drug Fund - - - the so-called "mouth ornament" is adorned with six topaz stones and two citrine stones, and is made of 10 karat yellow gold - - - you can see this below:

- - - In Carroll, Iowa , Matthew McNelly, 23, and Joey Miller, 20, were trying to break into an apartment here - - - but drew the attention of the resident, and were forced to flee - - - they were pulled over shortly thereafter following the resident's 911 call and identification of the would-be burglars' 1994 Buick Roadmaster- - - of course, it was pretty easy for the arresting officer to guess they had been up to no good - - - with the masks they had made - - - and were still "wearing" - - - made by a Sharpie marker - - - you have to see this to believe it!

And here's another thousand....

- - - In Proctor, Minnesota , Dennis Anderson, 62, had an accident - - - running into a parked vehicle with his vehicle - - - little wonder, considering that he was subsequently found to have a blood alcohol content of .29, more than three times the legal limit - - - what was unusual was Dennis vehicle - - - a La-Z-Boy lounge chair powered by an eight horsepower Kohler lawnmower engine - - - with   a stereo, headlights, a built-in cup holder - - - and a "He.ll Yeah It's Fast" bumper sticker.   You can see Dennis' "ride" below

When was it stolen - how long was it missing - and what was the motivation of the thief?

On August 21, 1911 , the Mona Lisa was stolen right off the wall of the Louvre in Paris.   It was such an inconceivable crime, that the Mona Lisa wasn't even noticed missing until the following day.

In the Autumn of 1913, two years after the Mona Lisa was stolen, a well-known antique dealer, Alfredo Geri, placed an ad in several Italian newspapers which stated that he was "a buyer at good prices of art objects of every sort."   In November of that year he received a letter from someone who claimed to be in possession of the Mona Lisa.   A meeting was arranged, and on December 10, 1913, an Italian man who claimed his name was Leonardo Vincenzo appeared at Geri's sales office in Florence, and said he wanted just two things; a half million lire for the painting - and a promise that the painting would never be given back to France.  Leonardo explained that he had stolen the painting in order to restore to Italy what had been stolen from it by Napoleon .

To make a long story short (you can read the long version at http://history1900s.about.com/od/famouscrimesscandals/a/monalisa.htm ), Geri said he would have to compare the painting with other da Vinci works, walked out with the painting - and summoned the police.

As for Leonardo's real name - it was Vincenzo Peruggia, who had worked at the Louvre in 1908. Still known by many of the guards, Peruggia had walked into the museum, grabbed the Mona Lisa, went to the staircase, removed the painting from its frame, and walked out of the museum with the Mona Lisa under his painters smock.

The painting was displayed throughout Italy before it was returned to France on December 30, 1913 .