In Rocky River, Ohio, residents on a number of streets have had to pick up their mail at the post office for weeks due to unsafe conditions for mail carriers. Cleveland.com reports carriers say a rafter of aggressive wild turkeys have prevented them from delivering mail to more than two dozen homes. The city has sent letters to people asking them to stop putting out bird feed in the hope the turkeys will go elsewhere.

In Minot, North Dakota, a man who wheeled a shopping cart with stolen merchandise out of a Hobby Lobby craft store was thwarted by snow. According to the Associated Press, police say the man filled up a cart with about $4,000 in products, but the cart got stuck in the snow in the parking lot and tipped over, prompting the man to run off. However, police say that along with the merchandise, the man left behind his wallet—which contained identification with his address.

In Randolph, Massachusetts, a couple hit the jackpot—twice. The husband recently won a $1 million jackpot on a $5 lottery scratch-off ticket. According to a press release from the Massachusetts State Lottery, this is a little over four months after his wife won a $1 million Publishers Clearing House prize. The couple plan to use their winnings to purchase a home in an older-than-55 community in order to avoid shoveling snow, they said.

In Apatity, Russia, a man was apparently desperate to imbibe. He stole a vehicle from a privately-run motorsport training ground, drove to a convenience store and crashed the vehicle into the store. Local news agency Hibinform says footage on social media shows him exiting the vehicle through the hatch and entering the store through the broken window. He was later arrested for possession of a stolen bottle of wine. The store was not licensed to sell alc.ohol that early in the morning, according to the agency.
This little boy is frustrated that his cup magic trick isn’t more difficult to figure out.

If you can't view the below video, try https://youtu.be/fQo5TC2kVQA.
In Norfolk, England, a BBC News reporter found it’s not so easy to report about lemurs.

If you can't view the below video, try https://youtu.be/sun1x0ANt-Y.
In Cornwall, U.K., a family was surprised by a sudden change in their pet rabbit’s appearance before Christmas. A cross suddenly appeared on the rabbit’s forehead. 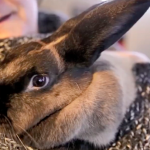