In New Jersey, better think before taking that drink before flying a drone. New Jersey Governor Chris Christie signed a law making it illegal to fly an unmanned drone aircraft after too many drinks, a spokesman said on the Republican’s last day in office. The law prohibits flying a drone with a blood alcohol content of 0.08% or higher, the same as for driving a vehicle, or while drugged. Violators face up to six months in jail, a $1,000 fine or both. The measure also bars flying a drone near a prison or in pursuit of wildlife.

In Prince William County, Virginia, a woman exited a 7-Eleven convenience store when two men, one with a handgun, approached and demanded her vehicle. According to the Associated Press, police say the woman struck one man with her bag before her 22-year-old daughter threw her hot chocolate toward both men, who then fled on foot.

In Seymour, Connecticut, a man walked into a bank and handed the teller a note. “This is a robbery, give me 5,000 nobody gets shot,” it read, according to the Valley Independent. The teller gave $500 cash to the man. But, it didn’t take long for detectives to find him after discovering the note he left at the bank was written on the back of his girlfriend’s pay stub. They went to the girlfriend’s home address and caught the man as he was trying to leave.
You never know what’s under the leaf pile.

If you can't view the below video, try https://youtu.be/QFMTn0ndUQY.
You think it’s been cold where you are? In the Yakutia region of Russia, temperatures hit minus 67 degrees Celsius (minus 88.6 degrees Fahrenheit) in some areas. The Associated Press reports that students routinely go to school even in minus 40 degrees. But school was canceled Tuesday throughout the region and police ordered parents to keep their children inside. On social media, women posted pictures of their frozen eyelashes. 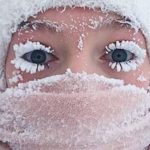 In Santa Ana, Calfiornia, a speeding car soared off a median divider and into a second-floor dental office. The vehicle lodged there as cops and rescuers arrived to extinguish a small fire and help extract one of the occupants, the Orange County Fire Authority noted in a series of tweets. Another car occupant exited unassisted. Both had minor injuries. Authorities say the driver had been using drugs. 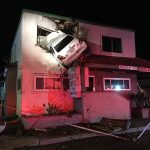 « Participants Made Record-Low Number of Trades in 2017