In Grand Haven, Michigan, a divorced man moved into his parents’ home. However, after a dispute, he left. A few months later, the parents traveled to Indiana to drop off their son’s possessions, but didn’t include his massive po.rn collection. According to the Associated Press, the man filed a lawsuit against his parents seeking a total of $86,822.16, which includes the value of the missing items and the amount it would cost to replace them.

In Jackson, Mississippi, residents of one neighborhood have a mystery on their hands. Someone is leaving bowls of mashed potatoes on their cars, porches and mailboxes. The Associated Press reports that some residents think it’s just a prank while other fear the potatoes contain poison designed to get rid of animals. News outlets report residents haven’t alerted law enforcement.

In Hamburg, Germany, the Morgenpost reported that police stopped a driver last week and told him his Porsche Panamera, sporting a reflective gold foil finish, might blind other drivers and was a danger. He was told to remove the foil and re-register the car, but police say he continued to drive it. The driver was stopped again Wednesday and police took his keys, papers and license plate, before the vehicle was towed to a garage. He was fined an unspecified amount and will have to remove the foil to make the car street legal again.

Near Zurich, Switzerland, a study by researchers at the Hirslanden Clinic suggests men’s beards have more germs than dogs’ fur. They compared the bacterial load in colony-forming units (CFU) of human-pathogenic microorganisms in specimens taken from 18 bearded men and 30 furry dogs. The researchers also compared the extent of bacterial contamination of an MRI scanner used by both dogs and humans with two other MRI scanners used exclusively by humans. Turns out all the bearded mean showed high microbial counts, compared with only 23 out of 30 dogs. Seven of the men had so much beard bacteria they were at risk of getting sick, according to the BBC. The jointly used scanner also had significantly lower bacteria counts than the scanners used only by humans. “On the basis of these findings, dogs can be considered as clean, compared with bearded men,” study author Andreas Gutzeit told the BBC.

In Wyoming, Michigan, a 5-year-old boy wanted food from McDonald’s, but his grandmother was sleeping. So, he called 911 and asked the dispatcher, “Can you bring me McDonald’s?” the Associated Press reports. The dispatcher told him no and reached out to police. The police officer says on the way to check out the boy’s home he thought, “I’m driving past McDonald’s on my way there and I might as well get him something.” The officer says the first thing the boy said to him was, “My grandma’s gonna be so mad, can you please go away?”
In Doral, Florida, a road crew gets an “F” in spelling. 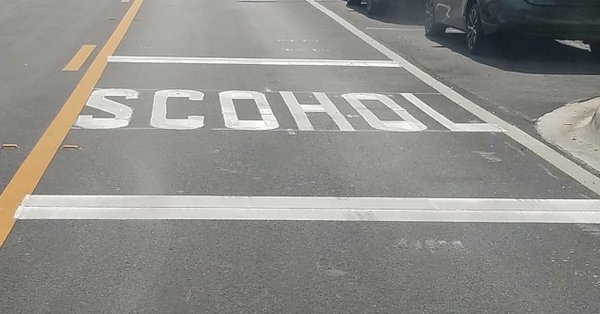 Watch for hidden bee hives in your home.

If you can't view the below video, try https://youtu.be/xjRlSpPb77Q.
Is the dog annoyed, or having sympathy for the baby?

If you can't view the below video, try https://youtu.be/o74LGoinsaU.