In Japan, a company is working on a product that it hopes will help protect and reassure women living by themselves. Still in the prototype stage, “Man on the Curtain” uses a smartphone connected to a projector to throw a moving shadow of a man doing various energetic activities onto a curtain. Customers can choose from a dozen different scenarios that show their man boxing, doing karate and even swinging a baseball bat, Reuters reports. To mix things up a bit, the man can calm down and do more mundane things like get dressed, chill out with a guitar or even do some vacuuming around the house or apartment. The system was developed for security at buildings run by Leopalace21 Corp,, said Keiichi Nakamura, manager of the firm’s advertising department.

In Denver, Colorado, a woman who returned from a flight to Paris told KDVR-TV that flight attendants had passed out apples and she placed one in her carry-on to save for her flight from Minneapolis to Denver. Her bag was randomly searched by Customs. The U.S. Customs and Border Patrol has fined the woman $500 for not declaring she was bringing a free apple into the U.S. Customs declaration forms ask passengers if they are bringing any fruits or vegetables into the country.

In Brownsville, Texas, a man has been sentenced to 50 years in prison for stealing $1.2 million worth of fajitas over nine years. According to the Associated Press, the man had been intercepting fajitas that he ordered through the Cameron County juvenile center where he worked and delivering them to his own customers. His scam was uncovered when he missed work for a medical appointment and an 800-pound fajita delivery arrived at the center, which doesn’t serve fajitas. He was fired in August and arrested after authorities checked vendor invoices and obtained a search warrant that uncovered county-funded fajitas in his refrigerator.

In New York City, a postal worker who prosecutors say hoarded away more than 17,000 pieces of undelivered mail allegedly told investigators he was overwhelmed by the amount of mail he had to deliver. But, he also told them he “made sure to deliver the important mail.” According to the Associated Press, federal officials say they arrested the 16-year employee after receiving a tip about a car he owned that contained 20 full mail bags. Authorities say they found 10,000 pieces of mail in his car, 6,000 pieces in his apartment and 1,000 in his work locker.

In Georgetown, Massachusetts, a mother says her daughter appeared sad one day when she came home from pre-school. The little girl told her mother she was upset because her teacher told her she couldn’t call one of her classmates her “best friend.” In a letter to the family, school officials said it had been their experience that the use of the term “best friend,” even when used in a loving way, can lead some children feeling excluded. The family is looking for a new pre-school for their daughter.
In Edgerton, Kansas, the owner of a cut-in-half car adorned with a sign reading, "Divorced. She got ½," is being told to junk it. The Kansas City Star reports that the half-car was created as a joke by the late-Edgerton Mayor Ray Braun who used to own the defunct gas station where the front part of the 1987 Chevrolet Citation is parked. Braun fitted the half-car with rear caster wheels and used to drive it in parades. The man who now owns the property where the vehicle sits argued in an administrative hearing that what city leaders call “an eyesore” can also be a town symbol and a monument to Braun, who, by the way, was never divorced. 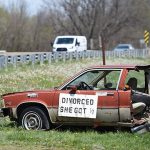 Little trick-or-treater says, “No thanks!”

If you can't view the below video, try https://youtu.be/YwaWObP0yX0.

If you can't view the below video, try https://youtu.be/McxKit32WbI.