In Camillus, New York, a 30-year-old man was ordered by a State Supreme Court Justice to move out of his parents’ house after living there rent free for eight years, the Syracuse Post-Standard reports. The man’s parents sent him numerous eviction notices and even gave him $1,100 to help him find a new place, WSTM, a local news channel, reports. However, while in court, the man refused to directly speak to his parents and argued with the Justice for a half an hour that he was entitled to an additional six months before eviction, citing a legal case he found on the internet that appeared to back his claim. The justice reportedly praised the man’s legal argument but sided with his parents and ordered him to move out, calling his demand for six more months “outrageous.” The man fired back, calling the judge’s order “outrageous.” He plans to appeal the decision. “I’m not bothering them by living here,” the man said in an interview with Good Morning America. “It’s little to no cost to them, and considering how much they’ve harassed me, I think it’s the least that they should be required to do, which is just let me hang here a bit longer and use their hot water and electricity.”

In Park City, Utah, a couple ran into a different sort of hazard during a round of golf on Memorial Day. A young moose bigger than their golf cart chased them off the links at the Park City Golf Club. The husband told the Deseret News he was getting ready to hit a shot when his wife started yelling. They jumped in the cart and made an escape as the animal headed off to a nearby pond. He says the animal wasn’t super aggressive, but it was “gigantic” so they didn’t hang around.Roundabouts can be tricky for some drivers.

If you can't view the video below, try https://youtu.be/1bdYyd87wjM.
In Sydney, Australia, a hotel valet escaped a crash, but the luxury car he was trying to park didn’t. According to the Associated Press, the valet drove the soft-top Porsche Carrera under another vehicle outside the Hyatt Regency Hotel. Emergency workers cut the driver out from the Porsche. The larger vehicle was propped up and its wheels were anchored while the vehicles were separated. The black Porsche, its hood and front bumper crunched and dented, was then backed onto a tow truck. 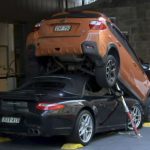