In North Vernon, Indiana, a woman reported her dentures were stolen by another woman who was actually using them. That same day, the denture thief had a meeting with her probation officer who noticed she was wearing dentures that were clearly not hers, according to the Jennings County Sheriff’s Office Facebook page. Deputies confronted the woman at her home and spotted the dentures—easily identified because they had the owner’s name on them.

In Revere, Massachusetts, a man who was Revere’s head parking technician has been charged with theft. According to the Boston Globe, the city was using seven new “smart” meters as part of a pilot program, and the man was the only person who could access them. During two months in 2017, the meters were calculated to take in $1,377, but this money wasn’t deposited to the city’s treasurer’s office. The man is facing larceny charges for taking the more than 5,000 quarters.

In Renner, South Dakota, a couple must have had one heck of a massive spider on their hands.

The truth is, they were in the process of demolishing their home and decided to write something funny on the roof. 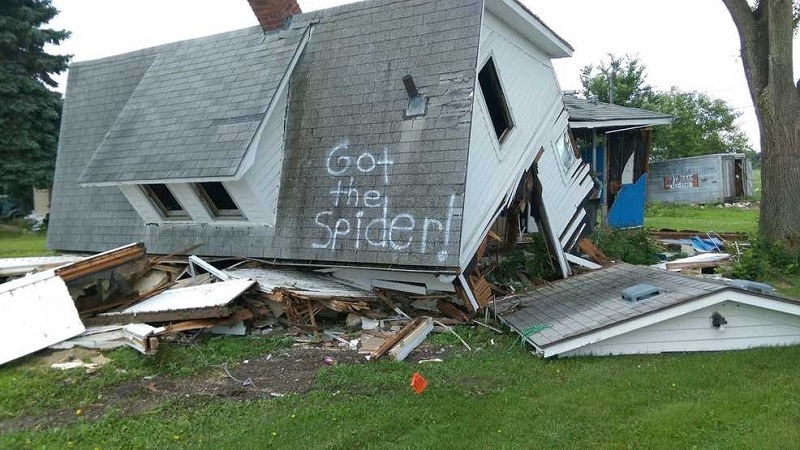 What’s that other dog doing there? Oh, he’s mocking me, eh?

If you can't view the below video, try https://youtu.be/p--CK2ewTbQ
.
Zombie chicken?

If you can't view the below video, try https://youtu.be/Tq80nEqvaoo.