In Tucuman, Argentina, an eight-year-old boy swallowed a piece of a pet toy. When he opened his mouth, he squeaked. “The whistle was stuck between the larynx and the pharynx,” a doctor told The Huffington Post by email. Using local anesthesia, the doctor was able to remove the squeaker from the boy’s throat.

In Taunton, Massachusetts, a man and woman were born on the same day at the same hospital. However, that isn’t the interesting part. More than two decades later, they got married. According to the Associated Press, the two did not grown up together, but met through mutual friends in high school. What are the odds?

In Casper, Wyoming, police were called about a publically into.xicated man who was giving a dire warning. When police arrived, the man told them “the aliens were coming next year and we needed to make sure to leave as fast as possible,” the Huffington Post reports. He refused to speak with nurses or doctors and instead insisted to meet with “the president” of the town, police said. He informed the officers that he was able to travel through time because the aliens filled his body with alcohol. He was allegedly found with a blood alcohol content of .136% and transported to the Natrona County Detention Center.

In Hicksville, New York, a burglar arrived after hours one night at Nelly’s Taqueria. According to Newsday, security video shows the man put on food-service gloves and started heating up a pot before hammering the register open. He pocketed the money and put a dollar in the tip jar. Then, he started cooking—beans, chicken and shrimp. After eating, he covered and refrigerated the food and wiped down surfaces.
Dogs like the ice cream truck too.

If you can't view the below video, try https://youtu.be/SA18ixsI9fI.

In Henderson, Kentucky, police are having a tough time investigating a robbery of a Rally’s restaurant because the main suspect is a man who was dressed as a giant Coke bottle, The Smoking Gun reports. 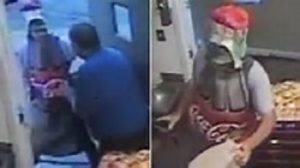