In Jacksonville, Florida, a woman stopped to get gas before work. While at the pump, a deer leaped over her and hit her in the head with its hoof. The woman said she thought she was being robbed. She is doing fine.

In Spain, a police vessel began pursuing a speedboat “with four people on board that was suspected of transporting drugs” in waters off the southern coast of Spain, a police statement said. During the chase, the two vessels collided, causing three police officers to fall into the sea as their boat “span out of control.” According to the AFP, the officers were pulled to safety—by the drug-smugglers they were chasing. Despite the assist, when police found three ton of hashish in the water nearby, the rescuers were arrested for drug trafficking.

In Moscow, Russia, a man has filed a lawsuit against Apple for moral harm claiming that an iPhone app had turned him gay, according to a copy of the complaint seen by AFP. The man filed suit asking for one million rubles ($15,000) after an incident this summer in which a cryptocurrency called “GayCoin” was delivered via a smartphone app, rather than the Bitcoin he had ordered. The GayCoin cryptocurrency arrived with a note saying, “Don’t judge until you try,” according to the complaint. “I thought, in truth, how can I judge something without trying?” the man said in the lawsuit. “Now I have a boyfriend and I do not know how to explain this to my parents” he added, alleging that Apple pushed him towards homosexuality through manipulation.

In Japan, scientists found that painting zebra-like stripes on cows significantly reduced attacks by biting flies, providing a means of defending livestock against flies without pesticides. The study’s inspiration came from past experiments that suggested the striped coats of zebras―and black and white surfaces in general―attracted fewer flies than the solid black color of the Japanese bovines that were studied. The Huffington Post reported that the researchers found the zebra-painted cattle were bitten nearly 50% less than solid-black animals. Flies are less likely to land on black and white surfaces due to the polarization of light, which impairs their perception, according to the study published in the journal PLoS One.

The terms “fake news,” “slam-dunk” and “promposal” have made it into the Oxford English Dictionary; however, it notes that “fake news,” although popularized by the president, actually dates back to 1890.
Near Portland, Oregon, a UPS driver responds to a parrot’s call for help.

If you can't view the below video, try https://youtu.be/EuyjYRE64ss.
In Pittsburgh, Pennsylvania, a woman smelled something burning while driving her car. She popped the hood and discovered squirrels had been storing their food for winter―which they’d taken from a walnut tree in her yard―around the engine. The animals had also brought in grass. The woman and her husband pulled out most of the stash themselves. But, mechanics at a local garage removed even more―enough to half-fill a trash can―from areas they couldn’t reach, reported CBS Pittsburgh. 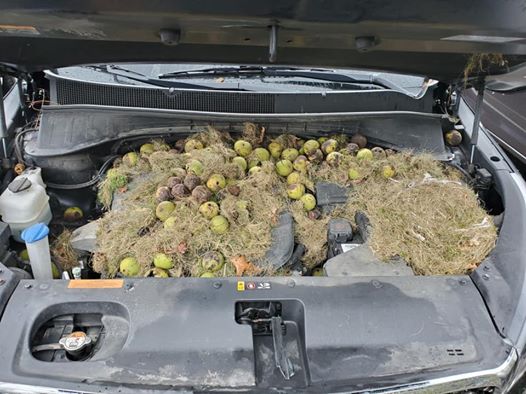