In Seathwaite, UK, a tractor carrying a big sheep trailer came across a road lined with parked cars on both sides. The driver couldn’t get through and couldn’t turn around, but he decided to go for it anyway, damaging at least four cars. Police are still looking for the tractor driver.

In Bolton, Connecticut, an election for the governing board of the town resulted in a tie. Both the Republican incumbent and the Democratic challenger received 718 votes. According to the Associated Press, the town charter says tied elections can be decided by a special election or a coin toss. Each candidate chose the coin toss to save the town the cost of a special election. The incumbent won.

In Vero Beach, Florida, a resident told deputies he and this three young sons woke up to a man yelling, howling and walking down the road around 6 a.m. one morning recently. Two hours later, they woke up again after hearing the man stomping on the roof of their home. The man claimed he was having a meeting with a DEA agent on the roof, but admitted to not knowing who the agent is, according to an arrest report. The local NBC News station reported that (surprise!) the man was found to be under the influence of an il.legal drug.
Maybe this little girl should watch more sports before her parents try to make her do a spectacular birthday entrance.

Just one of the dangers of working at the car wash.

If you can't view the below video, try https://youtu.be/GpDbnWh_-aQ.

Stove Top has developed a pair of pants to make Thanksgiving one of the most comfortable holidays of the year. The stretchy pants are designed as “unisex” and come in one color and style only. 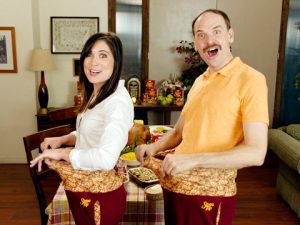 Claims Over Fidelity’s Use of Participant Data Dismissed

In the Future, the Bias Will Likely Be for Annuities