In Milton, Florida, a man recently threatened to kill his neighbor with “kindness.” But, not in the usual sense. Neighbors went to the suspect’s house, concerned about yelling and banging that had come from the home all day, according to the Pensacola News-Journal. The suspect came out of the house with an arm raised holding a mac.hete, which had the word “kindness” written on it—apparently the name he called the weapon.

In Wichita Falls, Texas, a woman has been banned from a local Walmart. Police tell the Times Record News that officers responded to a report of a suspicious person and confronted a woman who had been riding an electric shopping cart around the parking lot for about three hours. The woman was drinking wine from a Pringle’s can.

In Kansas City, Missouri, a guy named Dave kindly helped a motorist get unstuck from the snow and back on his way. He did not realize that the man he helped was Kansas City Chiefs offensive lineman Jeff Allen. After a plea on Twitter, Allen found the correct Dave and rewarded him with two AFC Championship tickets.

In San Jose, California, the owner of two cats went away to college, and the student’s father was unable to keep them. So, he asked a friend who owns apartments to rent him a kitchen-less studio so he could take care of his daughter’s cats. The father is paying $1,500 per month for the apartment, which the Mercury News reports is a good deal since the average studio apartment in San Jose rents for $1,951 per month.
In Williamson County, Texas, the sheriff has come up with a clever way to slow down speeders—and tests in school zones shows it is working. 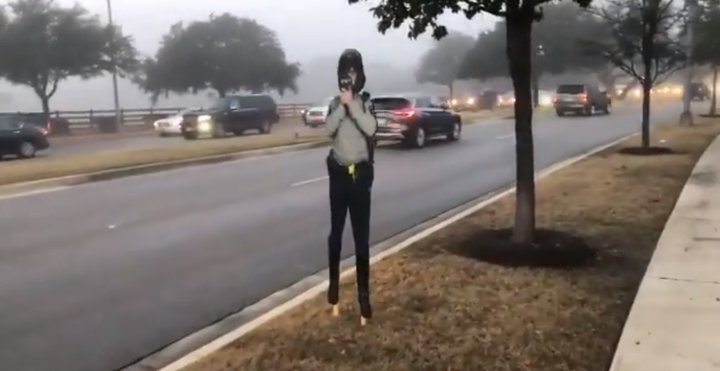 If you can't view the below video, try https://youtu.be/Cns8DGiEbpY.